Sierre is the capital of the district of Sierre in the canton of Valais in Switzerland. 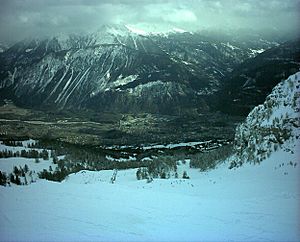 It has a population of 14,355. It is situated at the language border of the German-speaking upper part of the "Wallis" and the French-speaking "Valais". This city counts as one of the three official bilingual towns in Switzerland. Sierre is starting point for the tourist sites of the Val d'Anniviers including the villages of Vercorin, Chandolin, St-Luc Vissoie, St-Jean Chandolin, Grimentz, Zinal and Ayer. Sierre is connected with Crans-Montana by a cable car.

At the beginning of the 20th century, Sierre became economically important as very early aluminium smelting is enabled by its access to hydroelectricity.

All content from Kiddle encyclopedia articles (including the article images and facts) can be freely used under Attribution-ShareAlike license, unless stated otherwise. Cite this article:
Sierre Facts for Kids. Kiddle Encyclopedia.