Solanum elaeagnifolium, the silverleaf nightshade or silver-leaved nightshade, is a common native plant to parts of the sw USA, and sometimes weed of western North America and also found in South America. Other common names include prairie berry, silverleaf nettle, white horsenettle or silver nightshade. In South Africa it is known as silver-leaf bitter-apple or satansbos ("Satan's bush" in Afrikaans). More ambiguous names include "bull-nettle", "horsenettle" and the Spanish "trompillo". The plant is also endemic to the Middle East.

Solanum elaeagnifolium was described by A. J. Cavanilles. The plant described under the same name by W. Herbert and C. L. Willdenow based on E.G. von Steudel is Solanum aethiopicum. 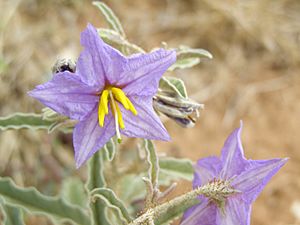 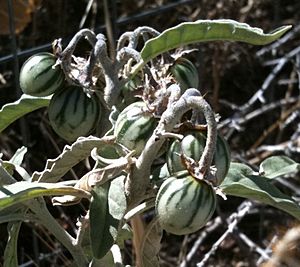 The leaves are up to 15 cm long and 0.5 to 2.5 cm wide, with shallowly waved edges, which distinguish it from the closely related Carolina Horsenettle (S. carolinense), which has wider, more deeply indented leaves. The flowers, appearing from April to August, have five petals united to form a star, ranging from blue to pale lavender or occasionally white; five yellow stamens and a pistil form a projecting center. The plant produces glossy yellow, orange, or red berries that last all winter and may turn brown as they dry.

Its range is from Kansas south to Louisiana, and west through the Mexican-border states of the United States into Mexico, as well as Uruguay, Argentina, and Chile. It may have originated in North America and was accidentally introduced to South America or the reverse. It can grow in poor soil with very little water. It spreads by rhizomes as well as seeds, and is common in disturbed habitats. It is considered a noxious weed in 21 U.S. states and in countries such as Australia, Egypt, Greece, India, Israel, Italy, South Africa, and Zimbabwe. It is toxic to livestock and very hard to control, as root stocks less than 1 cm long can regenerate into plants. However, some gardeners encourage it as a xeriscape ornamental.

The Pima Indians used the berries as a vegetable rennet, and the Kiowa used the seeds together with brain tissue to tan leather. 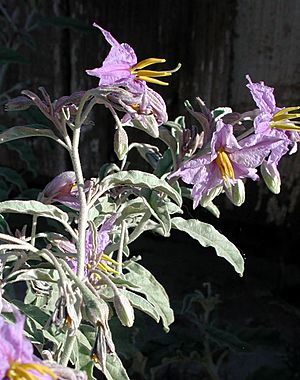 This plant has been described under a range of names, all now invalid. These contain many homonyms among them:

Several varieties and forms of S. elaeagnifolium have been named. They are not usually considered taxonomically distinct:

Not to be confused with S. angustifolium of Philip Miller

Not to be confused with S. grandiflorum of Ruiz and Pavón Jiménez

All content from Kiddle encyclopedia articles (including the article images and facts) can be freely used under Attribution-ShareAlike license, unless stated otherwise. Cite this article:
Silverleaf nightshade Facts for Kids. Kiddle Encyclopedia.