The area was named after the factories established by Stephen William Silver in 1852, and is now dominated by the Tate & Lyle sugar refinery and the John Knight ABP animal rendering plant.

A £3.5billion redevelopment of part of the district was approved in 2015.

In 1852 S.W.Silver and Co moved to the area from Greenwich and established a rubber works, originally to make waterproof clothing. This subsequently developed into the works of the India Rubber, Gutta Percha and Telegraph Cable Company, which constructed and laid many submarine cables. By the 1860s a number of manure and chemical works and petroleum storage depots had been set up. In 1864 the area became an ecclesiastical parish of its own, centred on the church of St Mark's.

Sugar refiners in the area were joined by Henry Tate in 1877 and Abram Lyle in 1881, whose companies merged in 1921 to form Tate & Lyle. Prior to the merger, which occurred after they had died, the two men were bitter business rivals, although they had never met in person. Tate & Lyle still has two large refineries in the area.

In 1889 Silver's factory was the scene of a twelve week long strike by the majority of its 3,000 workers. The strikers were demanding higher pay and were inspired by the recent successes of New Unionism in the East End of London. Management refused to negotiate with the strikers who had immense popular support. Leading figures in the strike included Tom Mann and Eleanor Marx. The workers were eventually starved back to work, with many being victimised for their role. In the aftermath of the strike, Silver's declared a half-early dividend of 5 percent. Silver's management were congratulated by the rest of the industry for holding a line against New Unionism.

On 19 January 1917 parts of Silvertown were devastated by a massive TNT explosion at the Brunner-Mond munitions factory, in what is known as the Silvertown explosion. Seventy three people died and hundreds were injured in one of the largest explosions ever experienced in the British Isles.

In the early 20th Century the area suffered greatly from road congestion due to being located between the Thames and the Royal Docks, then the largest and one of the busiest dock groups in the world. The area was cut off for much of the time by lifting bridges over dock entrances, and by level crossings which were closed for up to three quarters of each hour by train movements. This led in the early 1930s to the construction of the elevated Silvertown Way, one of the earliest urban flyovers.

On the first night of The Blitz, Tate and Lyle's sugar refinery, John Knight's Primrose Soapworks, and the Silvertown Rubber Works were all badly damaged by bombing.

Silver's was eventually taken over by the British Tyre and Rubber Co, later known as BTR Industries. The site closed in the 1960s and is now the Thameside Industrial Estate.

Another major local employer was the Loders and Nucoline plant at Cairn Mills, a traditional port oleo industry and formerly part of Unilever. This originally milled seeds but later concentrated on production of fats from palm kernel oil.

The district formed part of the County Borough of West Ham in Essex until 1965.

On 21 April 2015, Newham Council gave planning permission to The Silvertown Partnership for a new £3.5billion redevelopment of the area. The 7 million square foot development will provide offices, a tech hub, 3,000 new homes and brand experience pavilions. A school, health centre and shops are also included in the plan and an innovative new bridge will cross the Royal Docks to get people to Custom House station and Crossrail.

The Silvertown Partnership were selected as the development partner to take forward the regeneration of the site. 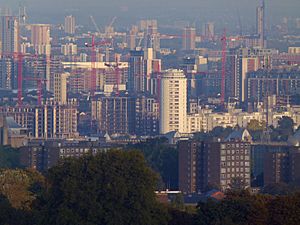 The Silvertown Partnership’s plans aim to deliver a vibrant new destination in London with homes, restaurants, commercial buildings, local convenience retail facilities and significant public realm for community use. The heritage of enterprise in the Royal Docks will be revitalised bringing up to 21,000 new jobs, up to 3,000 homes and contributing £260m each year of gross value to the London economy. The redevelopment will include the restoration of former flour factory Millennium Mills.

In January 2015, The Mayor of London announced an initial £12m of government funding to start work on demolishing part of Millennium Mills and clearing it of asbestos.

The Silvertown Partnership will work alongside the Greater London Authority, London Borough of Newham and local residents and businesses.

Prior to this latest development, the area was transformed in the 1970s by the construction of the Thames Barrier, an adjacent park, new housing areas and the London City Airport. In the mid 1990s much of the business activity in the area was centred on the brewing firm Bass.

London City Airport is located on the eastern edge of Silvertown.

A new bridge to connect Silvertown with Crossrail’s Custom House station is one of the features of a £3.5bn redevelopment plan for London’s Royal Docks.

Silvertown is featured in a ballad by Mark Knopfler, titled Silvertown Blues, which describes the area as it was before redevelopment.

The district also features in Charlie Connelly's book Attention All Shipping. In the first chapter "Sea, Soup and Silvertown" the author describes the his grandparent's flight from the area during The Blitz and the inspiration for the book.

In the British television drama Upstairs, Downstairs the character of Ruby leaves service with the Bellamy family to work in a munitions factory in Silvertown. She returns to 165 Eaton Place in a later episode on the very evening of the Silvertown explosion, having barely survived the disaster.

Melanie McGrath's book Silvertown is a novelistic account of her grandmother's life in the area, where she and her husband ran a cafe.

The Sugar Girls, by Duncan Barrett and Nuala Calvi, tells the true stories of women who worked at Tate & Lyle's Silvertown factories, and features much detail on the area.

The folk punk band The Men They Couldn't Hang called their fourth album Silver Town after the district. They mention it in the LP's seventh track "Blackfriars Bridge" (I looked along the river to the shores of Silvertown / Putting up castles, what are they tearing down?).

Silvertown is popular with urban explorers who regularly visit the site to take photographs of Millennium Mills to share on sites such as 28 Days Later.

For details of education in Silvertown, see List of schools in the London Borough of Newham.

All content from Kiddle encyclopedia articles (including the article images and facts) can be freely used under Attribution-ShareAlike license, unless stated otherwise. Cite this article:
Silvertown Facts for Kids. Kiddle Encyclopedia.