West Ham is a district in East London, located 6.1 mi (9.8 km) east of Charing Cross in the west of the modern London Borough of Newham. The West Ham electoral ward covers part of the central area of that borough.

The area, which lies immediately to the north of the River Thames and east of the River Lea, was originally an ancient parish formed to serve parts of the older Manor of Ham. Part of the hundred of Becontree, and part of the historic county of Essex, West Ham was an administrative unit, with largely consistent boundaries, from the 12th century to 1965, when it merged with neighbouring areas to become the western part of the new London Borough of Newham, a local government district of Greater London.

A settlement in the area named Ham is first recorded as Hamme in an Anglo-Saxon charter of 958 and then in the 1086 Domesday Book as Hame. The earliest recorded use of West Ham, as distinct from East Ham, is in 1186 as Westhamma. It is formed from Old English 'hamm' and means 'a dry area of land between rivers or marshland', referring to the location of the settlement within boundaries formed by the rivers Lea, Thames and Roding and their marshes. 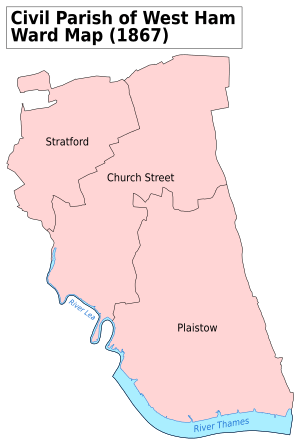 A map showing the wards of West Ham Civil Parish as they appeared in 1867.

West Ham formed a large ancient parish of around 4,500 acres (18 km2) in the Becontree hundred of Essex. The parish was divided into three wards: Church-street, Stratford-Langthorne, and Plaistow; with the village of West Ham corresponding to the Church-street ward. The parish also included the hamlet of Upton. Following the opening of Stratford station, the first railway station in the area, in 1839, the focus of activity shifted northwards towards the fast-expanding Stratford, with the original settlement diminishing in significance. In 1840 the parish was included in the Metropolitan Police District and soon after the built-up area of London had encompassed West Ham. The parish did not form part of the statutory metropolitan area established in 1855 or the County of London established in 1889. Instead, administrative reform was undertaken in the area in much the same way as a large provincial town. A local board was formed in 1856 under the Public Health Act 1848 and subsequently the parish was incorporated as a municipal borough in 1886. In 1889 the borough was large enough in terms of population to become a county borough and was outside the area of responsibility of Essex County Council. At the time of the 1901 census it was the ninth most populous district in England with a population of 267,308. The former county borough was merged with the adjacent County Borough of East Ham to form the new London Borough of Newham on 1 April 1965.

West Ham is located 6.1 mi (9.8 km) east of Charing Cross. West Ham station on Manor Road is served by the London Underground Jubilee, Hammersmith and City and District lines; the National Rail c2c services; and from 2010 the Docklands Light Railway. Plaistow and Stratford stations are also close by. Post-industrial land and a network of waterways separate West Ham from Bromley-by-Bow. To the north and east the area bleeds into Stratford and Plaistow, with Canning Town to the south. To the west lies Bromley by Bow.

The football club West Ham United F.C. is named after the area. Their nicknames, the Irons and the Hammers derive from their association with the Thames Ironworks and Shipbuilding Company, whose workers formed Thames Ironworks F.C. West Ham United F.C. played at the Boleyn Ground in nearby Upton Park between 1904 and 2016. The West Ham Stadium, a football, greyhound racing and speedway stadium, operated between 1928 and 1972, with a capacity of 120,000. The street names of housing developed on the site of the former stadium pay homage to the speedway greats associated with West Ham, including Bluey Wilkinson and Jack Young. The West Ham Hammers team were involved in the top flight leagues 1929 to 1939, 1946 to 1955 and 1964 to 1971, winning the inaugural British League in 1965.

While football is probably the main focus for the community, there is quite a lot of interest in other sports—with rugby being one of them. Next to West Ham station, on Holland Road, is the home of 3 rugby teams, all playing in Essex RFU leagues: Phantoms RFC, Kings Cross Steelers and East London RFC.

All content from Kiddle encyclopedia articles (including the article images and facts) can be freely used under Attribution-ShareAlike license, unless stated otherwise. Cite this article:
West Ham Facts for Kids. Kiddle Encyclopedia.