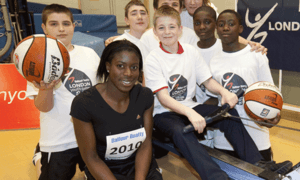 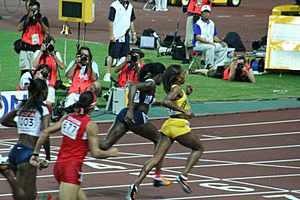 Ohuruogu (in dark blue, centre) winning the 400 m at the world championship in Osaka

Christine Ijeoma Ohuruogu, MBE (born 17 May 1984) is a British athlete. Her coach is Lloyd Cowan. She was born to Igbo Nigerian parents in Newham, London.

In 2009, she was made a Member of the Order of the British Empire.

In December 2013, she was given the Sunday Times and Sky Sports Sportswoman of the Year award. She was also nominated for BBC Sports Personality of the Year.

All content from Kiddle encyclopedia articles (including the article images and facts) can be freely used under Attribution-ShareAlike license, unless stated otherwise. Cite this article:
Christine Ohuruogu Facts for Kids. Kiddle Encyclopedia.