Southwell () is a minster town in the district of Newark and Sherwood in Nottinghamshire, England. It includes Southwell Minster, the cathedral of the Anglican Diocese of Southwell and Nottingham. A population of under 7,000 rose to 7,297 at the 2011 Census, and was put at 6,853 in 2019. The origin of the name is unclear. It lies on the River Greet, about 14 miles (22 km) north-east of Nottingham. Other historic buildings include prebendal houses in Church Street and Westgate and the Methodist church, which has a right of way beneath it, so that the upper floor seats more than the lower. The workhouse (1824) was a prototype for many others. Owned by the National Trust, it shows its appearance in the 19th century. Behind the Minster is a partly ruined palace, once a residence of the Archbishop of York. It includes the recently restored State Chamber, Cardinal Wolsey's former dining room, and gardens among the ruins.

The remains of a large, opulent Roman villa were excavated beneath the minster and its churchyard in 1959. Part of a mural from the excavation is displayed in the minster. The villa is one of three examples of its type found in the territories of the Corieltauvi (or Coritani) tribes - along with Scampton in Lincolnshire and Norfolk Street in Leicestershire. A section of the Fosse Way runs on the opposite bank of the River Trent with evidence of a Roman settlement at Ad Pontem ("to the bridge" or "at the bridge"), northwest of the village of East Stoke. There is no specific evidence of a road link between Ad Pontem and Southwell. Other evidence of a Roman settlement includes the use of Roman bricks in the prebendary buildings around the minster, remains of a fosse or ditch was discovered at Burgage Hill in the 19th century and it is speculated there may be Roman remains beneath the Church Street site of the recently vacated Minster School.

The Venerable Bede records the baptism of numerous converts in the "flood of the Trent" near Tiovulginacester by Paulinus in the presence of Edwin of Northumbria whom he had converted to Christianity in 627. There is no agreement on the exact location of Tiovulginacester, but Paulinus certainly visited the locale, and possiblly founded the first church in Southwell.

The remains of Eadburh, Abbess of Repton and daughter of Ealdwulf of East Anglia were buried in Southwell's Saxon church. Eadburh was appointed abbess under the patronage of King Wulfhere of Mercia. She appears in the Life of Guthlac and is believed to have died around 700 AD. Her remains were buried or translated to Southwell Minster, where her relics were revered in the Middle Ages. The only reference is a Pilgrims Guide to Shrines and Burial Places of the Saints of England supposedly was written in 1000 and records "There resteth St. Eadburh in the Minster of Southwell near the water called the Trent".

Eadwy of England gifted land in Southwell to Oskytel the Archbishop of York, in 956. Eadwy's charter is the first dated reference to Southwell. Evidence of a tessellated floor and the 11th century tympanum over a doorway in the north transept are evidence of the construction of the minster after this time. The Domesday Book of 1086 has much detail of an Archbishop's manor in Southwell.

A custom known as the "Gate to Southwell" originated after 1109 when the Archbishop of York, Thomas I wrote to every parish in Nottinghamshire asking for contributions to the construction of a new mother church. Annually at Whitsuntide the contributions known as the "Southwell Pence" were taken to the minster in a procession that set off from Nottingham headed by the mayor followed by clergy and lay people making a pilgrimage to Southwell's Whitsun Fair. The Southwell Pence was paid at the north porch of the minster to the Chapter Clerk. The name of this custom - the Southwell Gate - derives from the Scandinavian word “gata” meaning street or way to. In its original form it persisted well into the 16th century. In 1981 Dolphin Morrismen revived the tradition.

Geoffrey Plantagenet was ordained as a priest at Southwell in 1189. On 4 April 1194, Richard I and the King of Scots, William I, was in Southwell, having spent Palm Sunday in Clipstone. King John visited Southwell between 1207 and 1213, ostensibly for the hunting in Sherwood Forest, but also en route to an expedition to Wales in 1212.

The Saracen's Head was built in 1463 on land gifted in 1396 by the Archbishop of York, Thomas Arundel, to John and Margaret Fysher. When built, the first floor overhung the roadway in the vernacular of the time.

In 1603, James VI of Scotland passed through Southwell on his way to London to be crowned King James I.

During the English Civil War, King Charles I spent his last night as a free man in May 1646 in the Saracen's Head (then the King's Head), before surrendering to the Scottish Army stationed at nearby Kelham. The fabric of the town, the minster and Archbishop's Palace suffered at the hands of Oliver Cromwell's troops, as they sequestered the palace as stabling for their horses, broke down monuments, and ransacked the graves for lead and other valuables. In 1793, iron rings fastened to the walls to secure the horses were still in situ. The end of the civil war left the Archbishop's Palace in ruins apart from its Great Hall. It is reputed that Cromwell also stayed in the King's Head.

In 1656, a Bridewell was built on the Burgage. It was enlarged in 1787 when it became a prison for the county. There is evidence that a house of correction was built in 1611, so the Bridewell may itself have been an enlargement. Mary Ann Brailsford was baptized at Southwell in May 1791, and Matthew Bramley in 1796 in Balderton.

By 1801, the population was 2,305. In 1803, Lord Byron stayed with his mother in Burgage House during his holidays from Harrow and Cambridge. His mother rented the house; although by that time he had become 6th Baron Byron of Rochdale, the family home, Newstead Abbey required significant remedial work, which they could not afford.

As the site of an Anglican cathedral, the town is sometimes considered to be a city, and was treated as such in the 1911 Encyclopædia Britannica. However, its city status is not recognised by the government. Southwell has an active Town Council.

The town is something of an oddity for north Nottinghamshire, being visibly affluent, when compared with its near neighbours of Newark-on-Trent and Mansfield. Whereas agriculture and coal respectively have seen the fortunes of the other two towns fluctuate over the years, Southwell has remained an area of residence for many of Nottingham's more affluent residents.

In most parts of Nottinghamshire, 'Southwell' is pronounced SUH-thull, with a soft 'th' (as in 'the' or 'there') and a silent 'w'. However, residents of Southwell itself largely pronounce the word as it is spelt.

The Town Council, following the 2015 elections, is composed of eight Liberal Democrat Councillors, six Conservatives and one Independent. The Chairman of the Council in 2015-6 is Beryl Prentice and the Chairman of Finance and Policy is Peter Harris.

There are two infant schools [3+-5] Southwell Holy Trinity C of E Infants School and Lowes Wong Infant School. Lowes Wong Junior School teaches local children from 7-11 years of age. The local secondary school Southwell Minster School also offers an education for the choristers of the cathedral and gifted musicians in its Junior Department. It gets the among the best GCSE results in Nottinghamshire for GCSE and AS/A level results (source: BBC News). The school supplies the Minster choir, and until recently there was a boarding section for choirboys in the town. 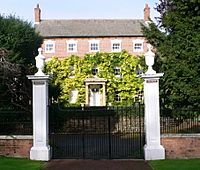 It was here that the well-known Bramley cooking apple was first seeded by Mary Ann Brailsford in 1809. A local nurseryman Henry Merryweather, 17 years old, saw its potential and cultivated it from cuttings. The apple is now used across the cookery world, and is renowned for its acidic taste and the fact that it cooks to a smooth puree. One of the local football clubs, Southwell City, is nicknamed "The Bramleys", and the town's new library and youth centre is known as 'The Bramley Centre' in honour of the town's contribution to British cuisine. In March 2009, a stained glass window was installed in Southwell Minister, commemorating the Bramley apple's 200th anniversary.

The local community newspaper is The Bramley, 11,200 copies are delivered monthly to Southwell and surrounding areas.

Sports clubs include Southwell Rugby Club (known as the Redmen) who were formed in 1922-23. In the 2011-12 season the club won an historical Treble of RFU Midlands 4 (East) North League Champions, Nottinghamshire Junior Cup winners and Nottinghamshire/Lincolnshire/Derbyshire Plate winners. Southwell Cricket Club and Southwell Amateurs Football Club who have not lost a game since early 2009 and consists of local players who were generally schooled in the area.

Southwell has a leisure centre run by a local trust, with trustees from the local community, although the district council also provides very limited support.

The town is accessed from Newark and Nottingham by the A612,and from north Nottingham and villages to the west by the B6386. The A617 primary route passes 2 miles to the north of the town in Hockerton, and the A1 and A46 trunk routes are both 7 miles away in Newark. The railway station at the nearby village of Fiskerton has had a small car park built in recent years to cater for Southwell commuters. Southwell is also served by Nottingham City Transport's rural Pathfinder 100 service to Nottingham and Stagecoach East Midlands (Mansfield) service to Mansfield and Newark. There are other infrequent services to nearby villages. 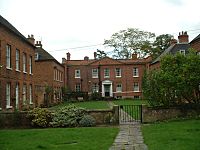 Vicars' Court and the Residence 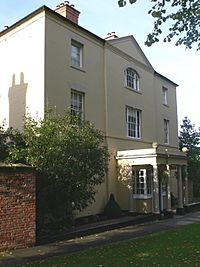 The town is twinned with Sées, a small town in France, and with Český Brod in the Czech Republic.

Secondary education in the town is predominantly provided by The Minster School, which still educates choristers of Southwell Minster. The Minster School is a Specialist College for Humanities and Music and was rated outstanding by Ofsted in 2011/2012. Pupils may also choose to attend school at Newark-on-Trent, which is about a 20-minute drive east. The School of Animal, Rural and Environmental Sciences is part of Nottingham Trent University. and offers further and higher education courses in agricultural-related subjects at its Brackenhurst campus just outside Southwell.

All content from Kiddle encyclopedia articles (including the article images and facts) can be freely used under Attribution-ShareAlike license, unless stated otherwise. Cite this article:
Southwell, Nottinghamshire Facts for Kids. Kiddle Encyclopedia.