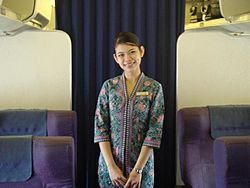 In aviation, flight attendants — also known as cabin crew, stewards, air hosts/hostesses, or stewardesses, — are members of a cabin crew employed by airlines. They make sure that the passengers on commercial flights (or, sometimes, business jets) are safe and comfortable during the flight.

All content from Kiddle encyclopedia articles (including the article images and facts) can be freely used under Attribution-ShareAlike license, unless stated otherwise. Cite this article:
Flight attendant Facts for Kids. Kiddle Encyclopedia.