Stow-on-the-Wold is a small market town and civil parish in Gloucestershire, England. It is situated on top of an 800 ft (244 m) hill, at the convergence of a number of major roads through the Cotswolds, including the Fosse Way (A429). The town was founded as a planned market place by Norman lords to take advantage of trade on the converging roads. Fairs have been held by royal charter since 1330 and an annual horse fair is still held on the edge of the town.

Stow-on-the-Wold, originally called Stow St. Edward or Edwardstow after the town's patron saint Edward, probably Edward the Martyr, is said to have originated as an Iron Age fort on this defensive position on a hill. Indeed, there are many sites of similar forts in the area, and Stone Age and Bronze Age burial mounds are common throughout the area. It is likely that Maugersbury was the primary settlement of the parish before Stow was built as a marketplace on the hilltop nearer to the crossroads, to take advantage of passing trade. Originally the small settlement was controlled by abbots from the local abbey, and when the first weekly market was set up in 1107 by Henry I, he decreed that the proceeds go to Evesham Abbey.

On 21 March 1646 the last battle of the first phase of the English Civil War took place one mile north of Stow on the Wold. After initial royalist success the superiority of the parliamentary forces, overwhelmed and routed the royalist forces. Fleeing the field, the royalists fought a running fight back into the streets of Stow where the final action took place, culminating in surrender in the market square. 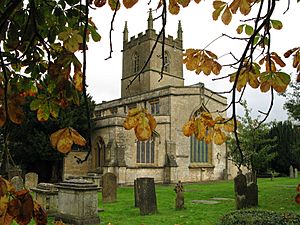 Given its exposed spot on the top of Stow Hill, the town is often referred to with the couplet "Stow on the Wold, where the winds blow cold".

"Stowe-on-the-Wold, Where the wind blows cold. Where horses young and old are sold, Where farmers come to spend their gold. Where men are fools and women are bold and many a wicked tale is told. High on the freezing Cotswold." etc.

The funeral of John Entwistle, the famous bass guitarist of the Who, was held at St Edward's Church Stow-on-the-Wold on 10 July 2002.

Stow-on-the-Wold was prominently featured in the eleventh episode of series 6 of Top Gear, when Jeremy Clarkson reviewed the Ford F-Series there. He chose to film it there because it's a typical village in the English countryside, as Jeremy compares it to the American countryside in the episode.

Several roads link Stow to the surrounding villages. The Fosse Way (A429), which runs from Exeter to Lincoln; the A424, which runs from Burford, into the A44 and into Evesham; and the A436, which connects Cheltenham and Gloucester with Stow.

All content from Kiddle encyclopedia articles (including the article images and facts) can be freely used under Attribution-ShareAlike license, unless stated otherwise. Cite this article:
Stow-on-the-Wold Facts for Kids. Kiddle Encyclopedia.