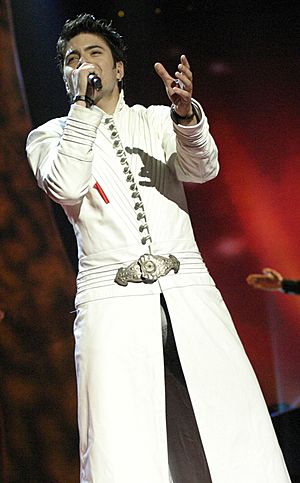 Todor "Toše" Proeski (25 January 1981 – 16 October 2007) was a Macedonian multi-genre singer, songwriter and actor. He was popular across the entire Balkan area and was considered a top act of the local Macedonian music scene. He was dubbed "Elvis Presley of the Balkans" by BBC News. He died in a car crash on Zagreb–Lipovac A3 highway, near Nova Gradiška in Croatia at the age of 26.

All content from Kiddle encyclopedia articles (including the article images and facts) can be freely used under Attribution-ShareAlike license, unless stated otherwise. Cite this article:
Toše Proeski Facts for Kids. Kiddle Encyclopedia.