After moving to the United States in 1961, Oliva played in the minor leagues before becoming a major league regular in 1964. Playing in baseball's "second deadball era", he was one of the game's best hitters and an All-Star during his first eight seasons. Oliva was the 1964 American League Rookie of the Year, an AL batting champion three seasons, an AL hit leader five seasons, and a Gold Glove winner one season. After eight seasons in the majors, Oliva's career was hampered by a series of severe knee injuries, forcing him to become a designated hitter during his final four years in baseball.

In 2014, Oliva missed being enshrined in the National Baseball Hall of Fame in 2015 by one vote from the Hall's Golden Era Committee which considered ten candidates for possible election from the 1947–1972 era.

Oliva was born in Pinar del Río Province, Cuba. He played baseball weekly with his father, brothers, and neighbors in a vacant lot near the family farm. Oliva's father, who worked in a tobacco factory and was famous for rolling the best cigars, was also a former semi-professional player who instructed Tony and helped him become "the best hitter in Pinar del Río". A scout for the Minnesota Twins noticed the youth and brought him to the United States to play professionally. He was reluctant to leave his parents and nine siblings, but his father encouraged him to become "rich and famous" in America.

Oliva arrived in the US in the spring of 1961. During spring training that year, he appeared in the Twins' final three games, collecting seven hits in ten at bats. The Twins, however, had already filled their minor league rosters and released Oliva, with some saying it was due to his poor outfield play. Having nowhere else to go, Oliva traveled to Charlotte, North Carolina to train with a friend who played for a Minnesota Twins Class A farm team. His quick wrists, long frame, and "unharnessed power" impressed Charlotte general manager Phil Howser, who placed a call and convinced the Twins to re-sign the potential star.

Due to a paperwork switch at Oliva's arrival in the US to reflect the name and birthdate of his younger brother Pedro Jr. (born 1941) in order to appear younger to major league scouts, many newspapers reported the 21-year-old Tony as his 18-year-old sibling. The name stuck and Oliva officially changed his name to Tony Pedro Oliva in the late 1990s.

The Twins assigned Oliva to the class-D Wytheville Twins in the Appalachian League, where he played in 64 games and led the league with a .410 batting average, but had a low fielding percentage of .854. After finishing second to Orlando Cepeda in batting average in the Puerto Rico leagues in winter ball, Oliva was sent to single-A Charlotte in the South Atlantic League, where he played 127 games and hit .350 with 17 home runs and 93 RBIs. He was called up to the major leagues with nine games left and debuted for the Twins on September 9, 1962, hitting a searing .444 in 12 plate appearances.

In 1963, he was invited to spring training with the Twins and management hoped that the lefty Oliva would counterbalance their right-handed sluggers Bob Allison and Harmon Killebrew. While there, he became friends with teammate, and fellow Cuban, shortstop Zoilo Versalles, who quickly became convinced that Oliva was "the new Ty Cobb", citing their similarities in hitting ability, speed, and arm strength. However, Oliva failed to make the Twins' major league team and was assigned to the Dallas-Fort Worth Rangers, the club's Class AAA affiliate in the Pacific Coast League. Disappointed, Oliva started the season slow, compiling a .235 average in his first two months. He recovered, however, and finished the minor league season with a .304 batting average with 23 home runs and 74 RBI. This earned him a call up for the final few games of the 1963 major league season. Once again he responded with a sizzling bat, hitting .429 in just 7 at-bats. 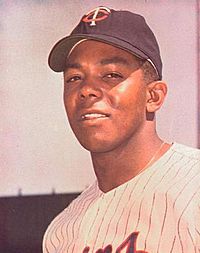 Compiling one of the great freshman campaigns in baseball history, Oliva was selected as a near-unanimous 1964 American League (AL) Rookie of the Year, receiving 19 of 20 first-place votes. His AL leading .323 batting average made him the first player ever to win both the Rookie of the Year Award and AL batting title. He also paced the AL in hits (217), doubles (43), extra base hits (84), total bases (374), runs (109), and runs created (133). Oliva's 374 total bases tied a rookie record. Oliva finished fourth in MVP voting.

In 1965, Oliva won a second straight AL batting title with a .321 average, his back-to-back wins once again a baseball first. His performances were all the more noteworthy for falling right at the onset of baseball's "second deadball era", with only two other AL hitters reaching the .300 mark that season, (Carl Yastrzemski (.312) and Vic Davalillo (.301)). Oliva added 16 home runs, 98 runs batted in, and 107 runs. He led the AL in hits (185), runs created (108), sacrifice flies (10), and batting average (.321), good for a second-place finish in MVP voting to teammate and Twins sparkplug Versalles. That season, Oliva became an All-Star for the first time. Oliva got into the All-Star game in right field in the eighth inning, replacing game starter Rocky Colavito, and had a double in the ninth inning after pinch hitting in the seventh inning and grounding out. 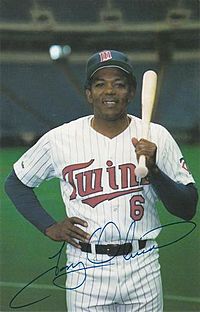 Oliva in 1987 during his coaching tenure with the Twins

Through the end of July in 1966, Oliva was leading the league with a .328 average. However, between August 21 and August 28 and September 13 and September 21, he slumped badly, collecting three hits in 29 at bats and four hits in 34 at bats respectively, which cost him a chance at his third straight batting title. Oliva finished with a .307 batting average and was the runner-up to Triple Crown winner and AL MVP Frank Robinson, who hit .316. For the third year in a row, Oliva led the AL in hits (191). Additionally, he won his only Gold Glove award, and finished sixth in MVP voting. One of the season's highlights came on June 9, 1966, in the seventh inning of a game against the Kansas City Athletics, where Oliva joined Harmon Killebrew, Don Mincher, Rich Rollins and Versalles to hit five home runs in a single inning. These five home runs, hit off starter Catfish Hunter (three) and reliever Paul Lindblad (two), stand as of 2011 an MLB record for the most home runs in a single inning.

After a somewhat off 1967, where he led the AL with 37 doubles and finished in the top 10 in batting average, slugging percentage, hits, total bases, RBIs, runs created, extra base hits, and intentional walks, Oliva's rebound in 1968 was cut short by injury. Missing the last 34 games, he once again hit .289, but so depressed were batting averages it was good for third in the AL by a single point (and only batting champ Yastrzemski topping .300 by a single point as well). He returned to form in 1969 to again place third in the AL with a .309 batting average, with 24 homers, 101 RBIs, and league leads in hits (197) and doubles (39). He finished third in batting average in the American League in 1970 at .325, with 23 home runs and 107 RBIs. He also led the AL in hits (204) for the fifth time, in doubles (36) for the fourth time, and finished second in MVP voting for the second time, this time to Baltimore's Boog Powell.

In 1971, Oliva won his third AL batting title with a .337 average and led the league in slugging percentage (.546). These feats at the end of a skein of eight straight All-Star appearances that began his rookie season marked the high point of his career, as severe knee, leg, and shoulder injuries hampered his remaining playing days. His roommate Rod Carew often heard Oliva "moaning and groaning" and getting up to obtain ice for his sore knees during the night. He missed all but ten games of the 1972 season, which required season-ending surgery. Due to injuries and a 1973 American League rule change establishing the position, he became the Twins' designated hitter that spring and remained in that role his final four seasons.

Oliva was a coach for the Twins after he retired as a player. As such, he holds the distinction of being the only on-field team member to appear with all three Minnesota Twins' World Series teams: star outfielder in 1965, hitting coach in 1987 and bench coach in 1991.

Other awards, honors, and achievements

Oliva was considered for election to the National Baseball Hall of Fame via voting of the Baseball Writers' Association of America (BWAA) from 1982 to 1996.

Writer Bill James, utilizing the Keltner list, determined that Oliva was a "viable Hall of Fame candidate", but ultimately did not endorse him as a Hall of Famer. Several contemporaries have endorsed Oliva's enshrinement in the Hall of Fame, including Tony Pérez, who mentioned in his 2000 induction speech that he hoped Oliva would soon be in the Hall of Fame.

In 2000, Oliva was considered for the National Baseball Hall of Fame by its Veterans Committee's election, but was unsuccessful. He was considered again by the Hall of Fame's Golden Era Committee (from the 1947–1972 era) election in 2011, but was short by four of the required 12 votes. In 2014, the Golden Era Committee considered him for the second time, but both he and former infielder/outfielder Dick Allen were one vote short of election; former third baseman Ron Santo was elected in 2011 and no candidates were elected in 2014.

Throughout his 15-year career, Oliva possessed a "rather pleasant disposition" and was known as a positive influence in a team's clubhouse. He was popular with the fans and the media of the Twin Cities during his career, and was given the nickname "Tony-O".

Oliva had strong offensive numbers during an era heavily dominated by pitching. He batted .304 with 220 home runs, 947 RBI, 870 runs, 1,917 hits, 329 doubles, 48 triples, 448 bases on balls and 86 stolen bases in 1,676 games played. In 13 postseason games, he batted .314 with 3 home runs and 5 RBI. He was selected to the All-Star team his first eight seasons, surpassing Joe DiMaggio's previous record of six selections. In addition, he was a powerful-armed Gold Glove outfielder who led AL right fielders in putouts 6 times, double plays 3 times, and assists twice.

In a 1976 Esquire magazine article, sportswriter Harry Stein published an "All Time All-Star Argument Starter", consisting of five ethnic baseball teams. Oliva was the right fielder on Stein's Latin team - an impossible snub of Hall of Famer Roberto Clemente, but a clear measure of how highly regarded Olivia was in his day.

In 1981, Lawrence Ritter and Donald Honig included him in their book The 100 Greatest Baseball Players of All Time. They explained what they called "the Smoky Joe Wood Syndrome", in which a player of truly exceptional talent but whose career was curtailed by injury, in spite of not having had career statistics that would quantitatively rank him with the all-time greats, should still be included on their list of the 100 greatest players.

Oliva started dating Gordette (DuBois) in the mid-60s. They were married in Hitchcock, South Dakota in 1968 and settled in Bloomington, Minnesota. He currently lives in a house he bought in 1972 and all of his four children live within 10 miles (16 km) of their parents. As of 2011, Oliva also had four grandchildren.

All content from Kiddle encyclopedia articles (including the article images and facts) can be freely used under Attribution-ShareAlike license, unless stated otherwise. Cite this article:
Tony Oliva Facts for Kids. Kiddle Encyclopedia.