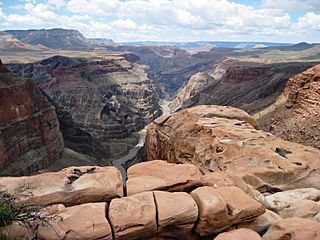 The Uinkaret volcanic field is a resultant of the two-fault system, at the intersection region. Two example landforms, Vulcan's Throne, and Lava Falls both occur west of Toroweap Point, North Rim Grand Canyon, along the faults. A small volcano even occurs above the fault on the South Rim.

The 2-fault system is part of the west perimeter regions of the west, and southwest Colorado Plateau, called the High Plateaus Section.

In the Grand Canyon, the Toroweap-Hurricane Fault causes a change of surface rock expression in the canyon's west, on the South Rim. The Esplanade Sandstone an erosion resistant member of the Supai Group creates a platform called The Esplanade. The landform is upstream on the Colorado River, South Rim, across from Toroweap Point, and the Toroweap Fault and Aubrey Cliffs are The Esplanade's west perimeter.

The Aubrey Cliffs are the west edge of the Coconino Plateau. They extend from the Colorado River south to Prospect Valley, its east perimeter, jump through a mountainous stretch to the north of Aubrey Valley, the cliffs forming its east and southeast border, with the south terminus, Chino Point, just west of Seligman, Arizona, at Interstate 40. The south terminus of Aubrey Cliffs is also near the beginnings of Chino Valley (Arizona), part of the beginnings of the Verde River watershed. The Big Chino Wash of Chino Valley starts a south trend, but immediately turns southeast towards central Arizona.

In Aubrey Valley at the southern region of the Aubrey Cliffs, the Cliffs are also eroded back along the Coconino Plateau; the Toroweap Fault is buried under gravels, towards the valley center, west of the north-trending cliffs.

All content from Kiddle encyclopedia articles (including the article images and facts) can be freely used under Attribution-ShareAlike license, unless stated otherwise. Cite this article:
Toroweap Fault Facts for Kids. Kiddle Encyclopedia.