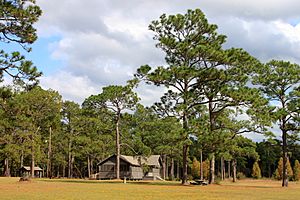 Ware County is a county located in the southeastern part of the U.S. state of Georgia. As of the 2010 census, the population was 36,312. The county seat is Waycross.

By geographic area, Ware County is the largest county in Georgia.

Ware County, Georgia's 60th county, was created on December 15, 1824, by an act of the Georgia General Assembly from land that was originally part of Appling County.

The county is named for Nicholas Ware, the mayor of Augusta, Georgia from (1819–1821) and United States Senator who represented Georgia from 1821 until his death in 1824.

Several counties were later created from parts of the original Ware County borders:

All content from Kiddle encyclopedia articles (including the article images and facts) can be freely used under Attribution-ShareAlike license, unless stated otherwise. Cite this article:
Ware County, Georgia Facts for Kids. Kiddle Encyclopedia.