Kids Encyclopedia Facts
This page is about the city. For the adjacent town, see Whitewater (town), Wisconsin.

Whitewater is a city in Walworth (mostly) and Jefferson counties in the U.S. state of Wisconsin. Located near the southern portion of the Kettle Moraine State Forest, Whitewater is the home of the University of Wisconsin–Whitewater. As of the 2010 census, the city's population was 14,390. Of this, 11,150 were in Walworth County, and 3,240 were in Jefferson County.

Whitewater was founded at the confluence of Whitewater Creek and Spring Brook, and named for the white sand in their beds. A gristmill was built on Whitewater creek, the resulting pond now called Lake Cravath. The town grew quickly when the first railroad line in Wisconsin passed through in 1853, but struggled when the two largest employers left town.

Whitewater was a New England settlement. The original founders of Whitewater consisted entirely of settlers from New England. These people were "Yankees", that is to say they were descended from the English Puritans who settled New England in the 1600s. They were part of a wave of New England farmers who headed west into what was then the wilds of the Northwest Territory during the early 1800s. Most of them arrived as a result of the completion of the Erie Canal. When they arrived in what is now Whitewater there was nothing but dense virgin forest and wild prairie, the New Englanders laid out farms, constructed roads, erected government buildings and established post routes. They brought with them many of their Yankee New England values, such as a passion for education, establishing many schools as well as staunch support for abolitionism. They were mostly members of the Congregationalist Church though some were Episcopalian. Due to the second Great Awakening some of them had converted to Methodism before moving to what is now Whitewater. Whitewater, like much of Wisconsin, would be culturally very continuous with early New England culture for most of its early history. 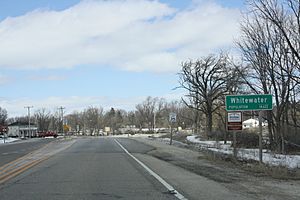 There were 4,766 households of which 18.8% had children under the age of 18 living with them, 26.2% were married couples living together, 7.4% had a female householder with no husband present, 3.8% had a male householder with no wife present, and 62.6% were non-families. 34.6% of all households were made up of individuals and 9.7% had someone living alone who was 65 years of age or older. The average household size was 2.28 and the average family size was 3.01.

There were 4,132 households out of which 19.3% had children under the age of 18 living with them, 30.5% were married couples living together, 7.1% had a female householder with no husband present, and 59.2% were non-families. 32.7% of all households were made up of individuals and 10.7% had someone living alone who was 65 years of age or older. The average household size was 2.38 and the average family size was 3.00. 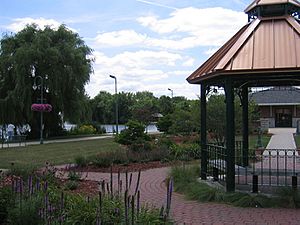 Annual events in Whitewater include "Freeze Fest" in January, the Bridal Fair, Farm Toy Show in February, Maxwell Street Day and the 4th of July Celebration in July. Adding to these annual events are the Minneica Water Ski Shows Saturday evenings on Whitewater Lake. Departing from the Highway 12 crossing of the Ice Age Trail, group biking tours depart several times a week from the area. September through April, Young Auditorium at the university features world-class entertainment.

Whitewater has several places of worship:

All content from Kiddle encyclopedia articles (including the article images and facts) can be freely used under Attribution-ShareAlike license, unless stated otherwise. Cite this article:
Whitewater, Wisconsin Facts for Kids. Kiddle Encyclopedia.