Willem Cornelisz Schouten (c. 1567 – 1625) was a Dutch navigator for the Dutch East India Company. He was the first to sail the Cape Horn route to the Pacific Ocean.

In 1615 Willem Cornelisz Schouten and his younger brother Jan Schouten sailed from Texel in the Netherlands, in an expedition led by Jacob Le Maire and sponsored by Isaac Le Maire and his Australische Compagnie in equal shares with Schouten. The expedition consisted of two ships: Eendracht and Hoorn. A main purpose of the voyage was to search for Terra Australis. A further objective was to explore a western route to the Pacific Ocean to evade the trade restrictions of the Dutch East India Company (VOC) in the Spice Islands. In 1616 Schouten rounded Cape Horn, which he named after the recently destroyed ship Hoorn, and the Dutch city of Hoorn, after which the lost ship was named, the town in which Schouten himself was born. Schouten named the strait itself "Le Maire Strait". Jan Schouten died on 9 March 1616 after the expedition left Juan Fernández. He crossed the Pacific along a southern role, discovering a number of atolls in the Tuamotu Islands, including Puka-Puka, Manihi, Rangiroa and Takapoto, followed by Tafahi, Niuafoʻou and Niuatoputapu in the Tonga Islands, and Alofi and Futuna in the Wallis and Futuna Islands. He then followed the north coasts of New Ireland and New Guinea and visited adjacent islands, including what became known as the Schouten Islands before reaching Ternate in September 1616.

Although he had opened an unknown route (south of Cape Horn) for the Dutch, the VOC claimed infringement of its monopoly of trade to the Spice Islands. Schouten was arrested (and later released) and his ship confiscated in Java. On his return he would sail again for the VOC, and on one of these trips he died off the coast of Madagascar in 1625.

Abel Tasman later used Schouten's charts during his exploration of the north coast of New Guinea. 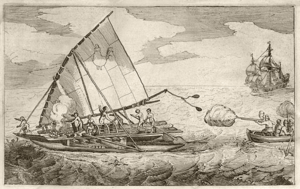 The ship De Eendraght finds a catamaran in 1618

Schouten described his travels in the Journal, published in a Dutch edition at Amsterdam in 1618 and soon translated into several other languages.

Among historians, including A. L. Rowse, there is no consensus about the authorship of this Journal. Schouten has got the credit for it, and thus the voyage has come down to us under his name. The Dutch, French, German and Latin texts all have nine engraved maps and plates which are not present in the English version, THE RELATION.

All content from Kiddle encyclopedia articles (including the article images and facts) can be freely used under Attribution-ShareAlike license, unless stated otherwise. Cite this article:
Willem Schouten Facts for Kids. Kiddle Encyclopedia.