Winslow is a town and census-designated place in Kennebec County, Maine, United States, along the Kennebec River. The population was 7,794 at the 2010 census.

Winslow was originally an Indian settlement named Taconock. During King William's War, Major Benjamin Church led his third expedition east from Boston in 1692. During this expedition he and 450 troops raided the native villages at both Penobscot (Castine, Maine) and present-day Winslow.

Winslow was then settled by colonists from Plymouth Colony. The area was covered by the land patent given by the English Crown to Pilgrim governor William Bradford and his associates. The earliest settlers had such Old Colony and Pilgrim names as Winslow, Bradford, Warren, and Otis. Descendants of those early settlers can still be found in the town.

In 1754, Fort Halifax was built by order of the Massachusetts General Court on the peninsula at the confluence of the Sebasticook and Kennebec rivers. A settlement subsequently sprang up under its protection, and was named in honor of General John Winslow, of Marshfield, Massachusetts who had overseen the fort's construction. General Winslow was a descendant of Edward Winslow, a Pilgrim governor of Plymouth Colony who arrived on the Mayflower and founded the town of Marshfield. General Winslow lived in the mansion built in 1699 by his father, Isaac Winslow. The historic Winslow House still stands today in Marshfield and is on the National Register of Historic Places.

The Sebasticook and Kennebec rivers provided major early routes to transport food, goods, and more settlers. Benedict Arnold followed the Kennebec River north in 1775, stopping at Fort Halifax in Winslow on his ill-fated attempt to invade Canada. The Fort Halifax blockhouse, formerly the nation's oldest wooden structure of its type, was rebuilt after the original was swept down the Kennebec River by raging flood waters on April 1, 1987.

Thousands of Irish and French Canadian immigrants used the Old Canada Road (now a scenic byway) section of U.S. Route 201 during the 19th century to find seasonal or project employment, and later make the Kennebec River Valley region their home. Early Winslow settlers used water power for industrial development. Modern Winslow developed around the Hollingsworth & Whitney Company paper mill, located along the Kennebec River. The mill was later purchased by the Scott Paper Company, whose 1995 merger with Kimberly-Clark led to the factory's closure in 1997. Winslow's industrial decline started in the 1980s, although some small light industry still exists, and new businesses continue to move into the town. Despite this, the service sector remains limited. Today, Winslow is a bedroom community for some middle- and upper-middle-class families who work in nearby Waterville and Augusta.

Scenes from the 2005 miniseries Empire Falls, starring Paul Newman, Ed Harris, and Helen Hunt, and based on the 2001 book Empire Falls by Richard Russo, were shot in Winslow. The town is home to the state's largest 4 July fireworks display.

The town is crossed by U.S. Route 201 and State Routes 11, 32, 100 and 137. It borders the towns of Benton to the north, Albion to the east, China to the southeast, Vassalboro to the south, and (across the Kennebec River) Waterville to the west. 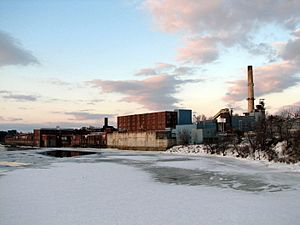 There were 3,328 households of which 28.7% had children under the age of 18 living with them, 50.3% were married couples living together, 10.6% had a female householder with no husband present, 4.7% had a male householder with no wife present, and 34.4% were non-families. 28.1% of all households were made up of individuals and 13.5% had someone living alone who was 65 years of age or older. The average household size was 2.34 and the average family size was 2.84.

There were 4,268 households out of which 30.7% had children under the age of 18 living with them, 53.7% were married couples living together, 10.4% had a female householder with no husband present, and 32.3% were non-families. 26.8% of all households were made up of individuals and 13.5% had someone living alone who was 65 years of age or older. The average household size was 2.35 and the average family size was 2.83. 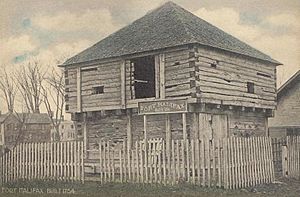 All content from Kiddle encyclopedia articles (including the article images and facts) can be freely used under Attribution-ShareAlike license, unless stated otherwise. Cite this article:
Winslow, Maine Facts for Kids. Kiddle Encyclopedia.