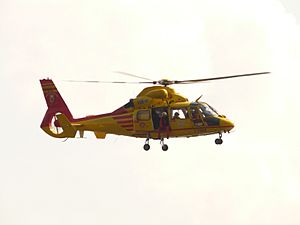 The Aérospatiale SA-365 Dauphin 2 is a French helicopter. It is both a civilian and military helicopter. Mainly used for search and rescue, it is also used for transport and war against submarines. In this last kind it can carry one or two torpedoes. It is a modernized variant of Aérospatiale SA-360 Dauphin, with two turboshafts.

Harbin Z-9 is a Chinese variant built under licence, and Eurocopter EC155 is the new one, built at the beginning as AS-365N4.

All content from Kiddle encyclopedia articles (including the article images and facts) can be freely used under Attribution-ShareAlike license, unless stated otherwise. Cite this article:
Aérospatiale SA-365 Dauphin 2 Facts for Kids. Kiddle Encyclopedia.