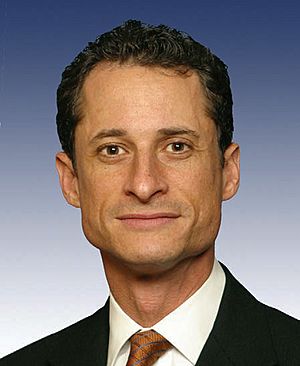 Anthony David Weiner (born September 4, 1964) is a former member of the United States House of Representatives. He represented the 9th district of the state of New York. Weiner is a member of the Democratic Party.

After graduating from college at the State University of New York-Plattsburgh in 1985, Weiner began working on the staff of Charles Schumer, who was then a Congressman from New York.

In 1991, Weiner became the youngest person to be elected to the City Council of New York City. Weiner was first elected to the United States House of Representatives in 1999.

In 2011, Weiner left the House of Representatives.

All content from Kiddle encyclopedia articles (including the article images and facts) can be freely used under Attribution-ShareAlike license, unless stated otherwise. Cite this article:
Anthony Weiner Facts for Kids. Kiddle Encyclopedia.