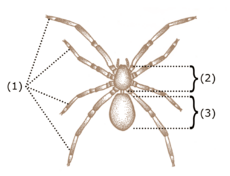 Basic characteristics of arachnids include four pairs of legs (1) and a body divided into two segments: the cephalothorax (2) and the abdomen (3).

The Arachnids are a class of eight-legged arthropods. They are a highly successful group of mainly terrestrial invertebrates: spiders, scorpions, harvestmen, ticks, and mites, and a number of smaller groups.

Almost all adult arachnids have eight legs, and arachnids may be easily distinguished from insects by this fact, since insects have six legs. However, arachnids also have two further pairs of appendages that have become adapted for feeding, defense, and sensory perception. The first pair, the chelicerae, serve in feeding and defense. The next pair of appendages, the pedipalps have been adapted for feeding, locomotion, and/or reproductive functions.

Like all arthropods, arachnids have an exoskeleton. They also have an internal structure of cartilage-like tissue, to which certain muscle groups are attached.

Arachnids have no antennae or wings. Their body is organized into two parts: the cephalothorax, and the abdomen.

There are some adaptations for life on land. They have internal respiratory surfaces. These may be trachea (tubes), or a modification of gills into a 'book lung'. This is an internal series of lamellae used for gas exchange with the air.

Arachnids are mostly carnivorous, feeding on the pre-digested bodies of insects and other small animals. Only the harvestmen and some mites eat solid food particles. Predigestion avoids exposure to internal parasites. Several groups secrete venom from specialized glands to kill prey or enemies. Several mites are external parasites, and some of them are carriers of disease (vectors).

Arachnids pour digestive juices produced in their stomachs over their prey after killing it with their pedipalps and chelicerae. The digestive juices rapidly turn the prey into a broth of nutrients which the arachnid sucks into a pre-buccal cavity located immediately in front of the mouth. Behind the mouth is a muscular, pharynx, which acts as a pump, sucking the food through the mouth and on into the oesophagus and stomach. In some arachnids, the oesophagus also acts as an additional pump.

Arachnids have two kinds of eyes: the lateral and median ocelli. The lateral ocelli evolved from compound eyes and may have a tapetum, which enhances the ability to collect light. With the exception of scorpions, which can have up to five pairs of lateral ocelli, there are never more than three pairs present. The median ocelli develop from a transverse fold of the ectoderm. The ancestors of modern arachnids probably had both types, but modern ones often lack one type or the other. The cornea of the eye also acts as a lens, and is continuous with the cuticle of the body. Beneath this is a transparent vitreous body, and then the retina and, if present, the tapetum. In most arachnids, the retina probably does not have enough light sensitive cells to allow the eyes to form a proper image.

In addition to the eyes, almost all arachnids have two other types of sensory organs. The most important to most arachnids are the fine sensory hairs that cover the body and give the animal its sense of touch. These can be relatively simple, but many arachnids also possess more complex structures, called trichobothria.

Finally, slit sense organs are slit-like pits covered with a thin membrane. Inside the pit, a small hair touches the underside of the membrane, and detects its motion. Slit sense organs are believed to be involved in proprioception, and possibly also hearing.

The word Arachnida comes from the Greek for 'spider'. In legend, a girl called Arachne was turned into a spider by the goddess Athena. Arachne said she'd win a weaving contest against the goddess. Arachne won, but Athena became angry, turning her into a spider for her hubris (pride) in challenging a goddess. 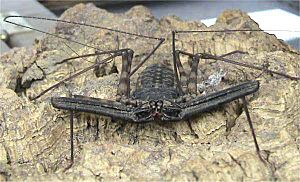 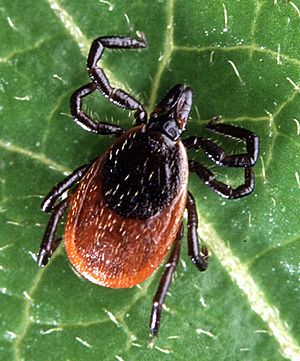 All content from Kiddle encyclopedia articles (including the article images and facts) can be freely used under Attribution-ShareAlike license, unless stated otherwise. Cite this article:
Arachnid Facts for Kids. Kiddle Encyclopedia.