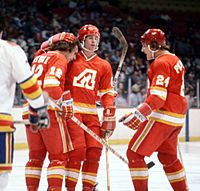 The Atlanta Flames were an ice hockey team in the NHL from Atlanta, Georgia, USA from 1972 to 1980. The team was moved to Calgary, Alberta, Canada for the start of the 1980–81 NHL season and were renamed the Calgary Flames. The team was named after the burning of Atlanta, led by U.S. Army general William Sherman during the American Civil War.

All content from Kiddle encyclopedia articles (including the article images and facts) can be freely used under Attribution-ShareAlike license, unless stated otherwise. Cite this article:
Atlanta Flames Facts for Kids. Kiddle Encyclopedia.