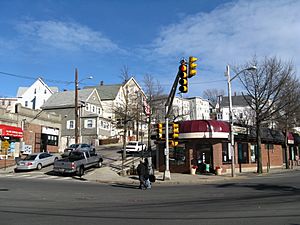 Beachmont is a relatively prosperous community within Revere, Massachusetts and is referred to as the Capital of the city by locals. This Boston area neighborhood is diverse with some turn-of-the-century homes overlooking the Atlantic Ocean and Belle Isle Marsh Reservation. East Boston and Winthrop border Beachmont on the South.

In the 1930s, Short Beach was the central community area for swimming, with Love Rock used for diving when the tide was right. Short Beach also was then the mooring site for one of or more lobster fishermen's boats. Clams and mussels were available in abundance, but while the clams were often dug, the mussels went unharvested. The shore of Short Beach, like others in Revere, was patrolled by soldiers at night during World War II. The gun implacemnts on the Winthrop shore were nearby and Revere's beaches were seen as a possible landing place for enemy invaders.

Before the subway came to Beachmont, it was served by the narrow-gauge railroad, with access to Revere Beach available via trolley cars. These days, Beachmont has convenient access to just about all major modes of transportation. Most homes are within walking distance of the MBTA's Blue Line (12 minute access to downtown Boston). Logan Airport is a 10-minute car or subway ride away. Routes 1 and 1A are both within a 5 minute drive. The beach is right around the corner.

Beachmont Station on the MBTA's Blue Line connects Beachmont to Boston, Massachusetts on the inbound track and Revere Beach on the outbound track. The T also runs the 119 bus through the neighborhood and the other parts of Revere.

All content from Kiddle encyclopedia articles (including the article images and facts) can be freely used under Attribution-ShareAlike license, unless stated otherwise. Cite this article:
Beachmont, Massachusetts Facts for Kids. Kiddle Encyclopedia.