Capsicum is a genus of plants from the nightshade family (Solanaceae). Some of these plants are used as spices, vegetables, or drugs. The fruit of Capsicum plants have a variety of names. The names vary depending on place and type. They are commonly called Chili pepper, red or green pepper, or just pepper in Britain and the US; the large mild form is called bell pepper in the US, capsicum in New Zealand English, Australian English and British English, and paprika in some other countries (although paprika can also refer to the powdered spice made from various capsicum fruit).

Capsicums originated in the Americas, but are now grown worldwide.

The fruit of most species of Capsicum contains capsaicin. Capsaicin is a chemical that can produce a strong burning sensation in the mouth of the unaccustomed eater. Most mammals find this unpleasant; however, birds are unaffected. The plants developed the secretion of capsaicin to protect the fruit from being eaten by mammals. At the same time, the bright colors attract birds. These birds will spread the seeds. The amount of capsaicin in peppers is highly variable and dependent on genetics. This means that almost all types of peppers have varied amounts of heat felt by those consuming them. The only pepper without capsaicin is the bell pepper. Chili peppers are of great importance in Native American medicine. Capsaicin is also used in modern Western medicine to stimulate blood circulation or to relieve pain.

Black pepper and Sichuan pepper cause similar burning sensations. These are caused they by different substances though —piperine and hydroxy-alpha-sanshool, respectively. 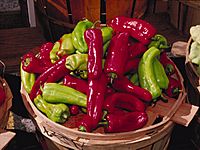 Capsicum fruits and peppers can be eaten raw or cooked. Those used in cooking are generally varieties of the C. annul and C. pubescens species, though a few others are used as well. They are suitable for stuffing with fillings such as cheese, meat or rice.

They are also frequently used both chopped and raw in salads, or cooked in stir-fries or other mixed dishes. They can be sliced into strips and fried, roasted whole or in pieces, or chopped and incorporated into salsas or other sauces.

They can be preserved by drying or pickling. Dried peppers may be reconstituted whole, or processed into flakes or powders. Pickled or marinated peppers are frequently added to sandwiches or salads. Extracts can be made and incorporated into hot sauces.

In 2005, a poll of 2,000 people revealed peppers to be Britain's 4th favorite culinary vegetable.

Many varieties of the same species can be used in many different ways; for example, C. annual includes the "bell pepper" variety, which is sold in both its immature green state and its red, yellow or orange ripe state. 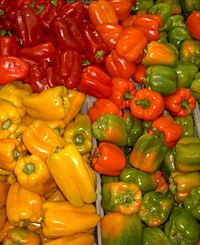 This same species has other varieties as well, such as the Anaheim chilly often used for stuffing, the dried Ancho chilly used to make chili powder, the mild-to-hot Jalapeño, and the smoked ripe Jalapeño, known as a Chipotle.

Most of the capsaicin in a pepper is found in the interior ribs that divide the chambers of the fruit, and to which the seeds are attached. At the stem end of the pod, glands secrete the capsaicin, which then spreads throughout, but is concentrated on the ribs and seeds. The amount varies very significantly by variety, and is measured in Scoville heat units (SHU), ranging from the mild bell pepper to the scorching Habanero chile.

The name given to the fruits varies between English-speaking countries.

In Australia, New Zealand, India, Singapore and Hong Kong, heatless species are called "capsicums" while hot ones are called "chilli/chillies" (double L). The term "bell peppers" is rarely used, usually in reference to C. annuum and other varieties which look like a "capsicum" or bell but are fairly hot.

In the United Kingdom, Ireland, and Canada, the heatless varieties are called "peppers", "sweet peppers" or "capsicums" (or "green peppers," "red peppers," etc.) while the hot ones are "chilli/chillies" (double L) or "chilli peppers".

In the United States and Canada, the common heatless species is referred to as "bell peppers," "sweet peppers," "red/green/etc peppers," or simply "peppers", while the hot species are collectively called "chile/chiles," "chili/chilies," or "chili/chile peppers" (one L only), "hot peppers", or named as a specific variety (e.g., banana pepper). In many midwestern regions of the United States the Sweet Bell Pepper is commonly called a mango.[1] With the modern advent of fresh tropical fruit importers exposing a wider latitude of individuals to the tropical fruit variety of the Mango, this definition is becoming archaic. However many menus still call a stuffed Bell Pepper a Mango.

The name "pepper" came into use because the plants were hot in the same sense as the condiment black pepper, Piper nigrum. But there is no botanical relationship with this plant, nor with Sichuan Pepper. 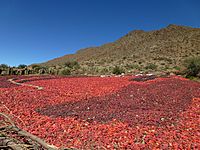 In Spanish-speaking countries there are many different names for each variety and preparation. In Mexico the term chile is used. Several other countries, such as Chile, whose name is unrelated, Perú, and Argentina, use ají. In Spain, heatless varieties are called pimiento and hot varieties guindilla.

In Indian English, the word "capsicum" is used exclusively for bell pepper. All other varieties of chili peppers are called chili. In northern India and Pakistan, bell pepper is also commonly called "Shimla Mirch" in the native languages. Shimla incidentally is a popular hill-station in India (and "Mirch" means chili in native languages).

In Polish, the word papryka is used for capsiscum fruit and dry spice (the word pieprz is used for black, red, and green pepper, but not for capsisum fruit or spice).

In Hungarian, the word paprika is used for capsicum fruit and dry spice.

You can test how hot a hot pepper can be by using the Scoville scale.

All content from Kiddle encyclopedia articles (including the article images and facts) can be freely used under Attribution-ShareAlike license, unless stated otherwise. Cite this article:
Capsicum Facts for Kids. Kiddle Encyclopedia.