Bingham lies near the junction of the A46 (the old Fosse Way) and the A52, about nine miles (14 km) east of Nottingham and similar distances south-west of Newark-on-Trent and west of Grantham. Neighbouring communities are Radcliffe-on-Trent, East Bridgford, Car Colston, Scarrington, Aslockton, Whatton in the Vale and Cropwell Butler. There is a market in the central Market Place every Thursday, and a farmers' market there on the third Saturday of the month.

The Romans built a fortress at Margidunum (Bingham) and a settlement at the river crossing at Ad Pontem (East Stoke) on the Fosse Way that joined Isca (Exeter) to Lindum (Lincoln). The south-east of Nottinghamshire later formed the wapentake of Bingham. Bingham acquired a market charter in 1341.

Eastern end of A52 bypass, which opened in December 1986

Bingham has expanded vastly since the 1950s, and most of the housing is relatively new. Most of the older buildings (including the Church of St. Mary and All Saints, Bingham, the oldest) are in the centre.

About 500 houses are being built bordering the A52 (Grantham Road) and the existing Mill Hill estate. There have been concerns that the 1000+ people who will move into these new houses will require more and improved services, which the local councils are so far proving reluctant to provide, despite the large sums gained for the Exchequer from the sale of the land in public ownership. Another 1000 houses are planned as part of 'Future Bingham', north of the railway line.

The A46, to the west of the town, was upgraded and completed in 2013 as a grade-separated dual-carriageway. The Widmerpool-Newark Improvement has been diverted to the west of the former Roman town to preserve the archaeology. The A52 bypass to the south of the town opened in December 1986. 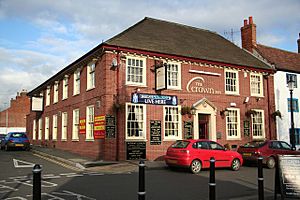 Of the six pubs in the town, four remain as such: the Butter Cross (Wetherspoons, formerly The Crown), the Horse and Plough (Castle Rock Brewery), the White Lion and the Wheatsheaf.

Bingham Leisure Centre has sports facilities and a swimming pool. These are attached to Toot Hill School.

The town's sports clubs are: 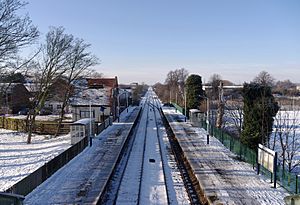 Trentbarton provides a frequent public bus service into Nottingham. Bingham's main railway station provides an hourly service to and beyond Nottingham and Grantham and to Skegness along the Poacher Line. Another station south of Bingham named Bingham Road was opened on the Nottingham-Leicester-Northampton Line. It closed in 1951 to passengers and 1964 to freight. The station site has been demolished and the trackbed is now used as a greenway.

The A46, to the west of the town, was upgraded and completed in 2013 as a grade-separated dual carriageway. The Widmerpool-Newark Improvement has been diverted to the west of the former Roman town to preserve archaeological remains. The A52 bypass to the south of the town opened in December 1986.

Although Bingham is largely a dormitory town for Nottingham, it has several businesses and a busy centre. Its shop vacancy rate of 2 per cent contrasts with an East Midlands average of 16 per cent.* There are 20 takeaways and places to eat, 11 hairdressers/salons, 5 estate agents and 39 other retail outlets.

The open-air food market in the central Market Place takes place every Thursday and a farmers' market there on the third Saturday of the month. Bingham provides shopping, medical and other services to surrounding villages. Planning permission has been gained to build a large supermarket near the town centre, but construction has yet to begin. In March 2015 planning permission was given for two other chain supermarkets.

To the north of the town there is an industrial estate holding about 40 businesses. The largest include GWIBS 24/7, Focus Label Machinery, Trent Designs, XACT Document Solutions, The Workplace Depot and Water at Work, and a business club.

All content from Kiddle encyclopedia articles (including the article images and facts) can be freely used under Attribution-ShareAlike license, unless stated otherwise. Cite this article:
Bingham, Nottinghamshire Facts for Kids. Kiddle Encyclopedia.