Brightlingsea is a coastal town and an electoral ward in the Tendring district of Essex, England. It is situated between Colchester and Clacton-on-Sea, at the mouth of the River Colne, on Brightlingsea Creek. At the 2011 Census, it had a population of 8,076.

Its traditional industries included fishery (with a renowned oyster fishery) and shipbuilding. With the decline of these industries, the town is largely a dormitory town for Colchester.

Brightlingsea is a limb of Sandwich, one of the Cinque Ports. The town retains an active ceremonial connection with the Cinque Ports, electing a Deputy from a guild of Freemen.

In the centre of the town is Jacob's Hall, reputedly the oldest timber-framed building in England, built during the fourteenth century. Also in the town centre is Victoria Place, where many local businesses are based.

To the west, on the creek is Western Promenade. It has lines of beach huts, a skate park, swimming pool, boating lake, and paddling pool. It is a popular destination for tourists and Londoners. Bateman's Tower, a local landmark by the sea, has recently been renovated by the Colne Yacht Club with help from a Lottery Fund grant.

Brightlingsea sits on a promontory surrounded by the River Colne and its associated marshes and creeks (it was an island until the 16th century), and was settled from an early date. In 1995, an Early Neolithic pot, dated 4,000 to 3,100 BC, was found in a D-shaped enclosure with a ditch on a farm near Brightlingsea. Other early remains in the area date from the Bronze Age, Roman and Saxon periods.

In the Domesday Book of 1087, the population of Brightlingsea (or Brictesceseia) was given as 24 villagers, 26 smallholders and 5 slaves. The lord of the manor had been King Harold Godwinson, but the title had passed to King William I. The medieval town grew up around two centres, firstly around the parish church (see All Saints' Church below) and secondly close to the shore where a port had developed. Trade was in oysters, fish, copperas (a locally found green pigment of iron(II) sulphate) and locally made bricks.

The Cinque Ports were a confederation of the five most important ports on the coast of the English Channel. They had obligations to provide ships and men to fight for the king in time of war but were compensated by lucrative exemptions from taxation. All of the Cinque Ports acquired "Limbs" or subsidiary ports that would ease the burden of their wartime obligations and share the beneifits of their privileges. Brightlingsea became a Limb of the Head Port of Sandwich, and is the only community outside Kent and Sussex which has any connection with the Confederation of the Cinque Ports. Although these days it is a purely ceremonial affair, every year at the parish church, on the first Monday after Saint Andrew's Day (the first in December), known as "Choosing Day", the Freemen of Brightlingsea gather to elect the "Deputy of Brightlingsea" who is the representative of the Mayor of Sandwich in the Liberty.

At the start of World War II, the Royal Navy established a base in the harbour called HMS Nemo which operated small auxiliary patrol vessels and air sea rescue boats.

The port came to prominence in the 1984–85 Miners' Strike, where attempts were made to import coal through the Port (as with the small port at Wivenhoe further up the river Colne). However the efforts of picketing miners prevented coal imports through Brightlingsea. The construction of the Gunfleet Sands Offshore Wind Farm operates from the port. 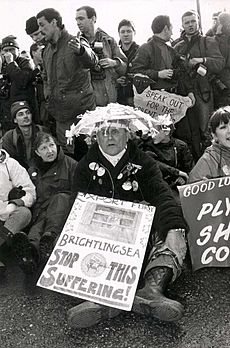 'The Battle of Brightlingsea'

Brightlingsea port came to national prominence again in the 1990s with an attempt to use the port again for a controversial cargo. Dubbed the "Battle of Brightlingsea" it comprised a series of protests against the live export of animals from the town for slaughter in Europe. Many people believed that the conditions in which the animals were exported were cruel and inhumane. The protest began on 16 January 1995 and ended on 25 October 1995. During this nine-month period, over 150 convoys passed through the town and 250,000 animals were exported; of these, 24 died, 28 were destroyed by the M.A.F.F., and 38 could not be exported. 598 people were arrested by the police, of whom 421 were local residents. The campaigners eventually won and the live exports ceased. Over 1,000 complaints were made against the police and the estimated cost of policing the protest was over £4,000,000. 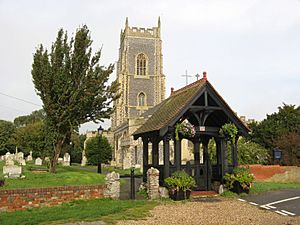 The ancient parish church of Brightlingsea stands on a hill at the northern edge of the town. The earliest surviving parts of the building, the chancel, the north and south chapels, and the eastern end of the nave and aisles, date from the 13th century. Further additions were made in the 15th century including the four-storey tower, which was completed around 1490. The church contains a number of monuments dating from the 13th to the 19th centuries. Most notable is a band of 211 square memorial tiles dating from 1872 to 1973; each tile records a Brightlingsea person who has died at sea. A marine chart dated 1590 gives Brightlingsea Church as a navigation mark; Canon Arthur Pertwee, who was the vicar from 1872 to 1917, even in his old age climbed the tower to give a guiding light to the fishing fleet entering the harbour. The church is used as a meeting place to elect the Deputy of Brightlingsea, the officer responsible to the Mayor of the Cinque Port of Sandwich. All Saints is a Grade I listed building. 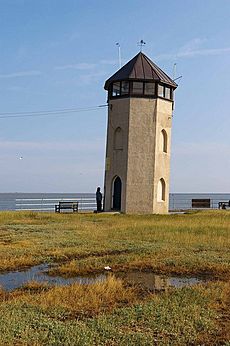 Bateman's tower was built in 1883 by John Bateman which he used as a folly for his daughter to recuperate from consumption; however it may have been intended as a lighthouse as part of a failed plan to expand the port. The tower is sited on Westmarsh point at the entrance to Brightlingsea Creek on the River Colne, and is often mistaken for a Martello Tower. During The Second World War the original roof of the folly was removed so that the tower could be used as an observation post by the Royal Observer Corps. In 2005, a restoration project funded by The Heritage Lottery Fund took place to restore the tower to its original condition, including the fitting of a replica of the original roof, refurbishing the interior of the tower and also painting the outside. The tower is now used by the Colne Yacht Club to administer races. During race days, the public can visit the tower, whose new roof makes it a popular gallery from which to watch races. Bateman's Tower is leaning slightly; it is said that its foundations were laid on bundles of faggots. It is a Grade II listed building.

Brightlingsea open air swimming pool was built in 1933 and is one of the few remaining lidos (open air swimming pools built mainly in the art-deco period) still in use in the UK. Brightlingsea Lido was originally a salt water pool, but is now a two-level, non-heated freshwater facility. The pool had recently been threatened with closure, but local opposition and the pool's status as listed lido helped save it. The pool comprises a 15m children's pool and a 50m main swimming pool, with a 2.0m diving pit located in the deep end. The facility is always popular and regularly used by residents and visitors to the town.

Beach at end of Western Promenade with Bateman's Tower in distance

The Wivenhoe and Brightlingsea railway opened in 1866 and was a branch line that operated rail services from the nearby town of Wivenhoe into the town centre of Brightlingsea.

The service unfortunately fell victim to the Beeching cuts in the 1960s, and was eventually axed in 1964 supposedly prompted by the high maintenance costs of the swing bridge over Alresford Creek, which was necessary to allow boat traffic to the many sand and gravel pits in the area.

Brightlingsea railway station was located on the southern side of Lower Park Road where the town's community centre now sits. It stayed in place for four years after the railway's closure until it was destroyed by fire in 1968.

The visible relics of the railway's presence today are the Railway public house and micro-brewery, and the old embankment which is now a footpath. It is possible to walk along virtually the whole length of the former route from very near the site of the old station in Brightlingsea along the old embankment to the site of the former swing bridge. This makes for a pleasant, scenic walk alongside the River Colne with its ecologically interesting salt marsh environment.

The closest railway station with parking facilities is now Great Bentley. The station at Alresford is closer but lacks parking.

Being almost totally surrounded by the Colne Estuary, Brightlingsea Creek & salt marsh, Brightlingsea's road links are unusually limited for a town of its size, with only one road linking the town with the outside. During the North Sea Flood of 1953 Brightlingsea was cut off from the outside, though the town itself was not as severely affected as some neighbouring communities.

One of the reserve schemes of Sustrans's Connect2 scheme is a new swing bridge over Alresford Creek. This is to give an alternative crossing over the waters around Brightlingsea.

The Brightlingsea One Design is a class of wooden dinghy designed in 1927 by Robbie Stone of Stone's shipyard (now the waterside marina). The boats are of clinker construction, originally planked in elm and later boats in mahogany. The boats numbered 5x boats are constructed in GRP.

All content from Kiddle encyclopedia articles (including the article images and facts) can be freely used under Attribution-ShareAlike license, unless stated otherwise. Cite this article:
Brightlingsea Facts for Kids. Kiddle Encyclopedia.