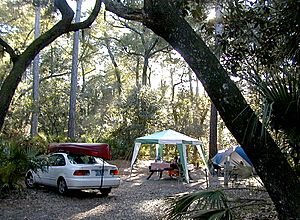 Camping, with a car nearby

Camping is a leisure activity, usually during summer when school children are on holiday, where people leave their homes and spend one or more nights outdoors. Usually they seek nature, adventure, or a different environment. They may sleep in a campervan or trailer, a tent, or in the open air in good weather. Winter camping is less common but in some parts of the world, tents are people's homes year around.

When camping, people usually prepare food to eat that is easy to make. If they were hunting or fishing, they may cook the animal or fish they caught over a campfire.

Dangers can arise, such as wild animals or illness from drinking unclean water.

Today’s campers have a range of comforts available to them, whether their shelter is a tent or a recreational vehicle. Today, backcountry campers can pack-in comfortable mattresses, compact chairs, and solar powered satellite phones. Those choosing to camp closer to their car ("car camping") with a tent have access to portable hot water, tent interior lighting, and technological changes to camping gear. For those camping in recreational vehicles (RVs), options include air conditioning, bathrooms, kitchens, showers, and home theatre systems. In the United States, Canada and Europe, some campgrounds offer hookups where recreational vehicles are supplied with electricity, water, and sewer services.

Other vehicles used for camping include motorcycles, touring bicycles, boats, canoes, using pack animals, and even bush planes; although backpacking is a popular alternative.

Tent camping sites often cost less than campsites with full amenities, and most allow direct access by car. Some "walk-in" sites lie a short walk away from the nearest road, but do not require full backpacking equipment. Those who seek a rugged experience in the outdoors prefer to camp with only tents, or with no shelter at all ("under the stars").

All content from Kiddle encyclopedia articles (including the article images and facts) can be freely used under Attribution-ShareAlike license, unless stated otherwise. Cite this article:
Camping Facts for Kids. Kiddle Encyclopedia.