Cane Beds is a census-designated place (CDP) that is also a populated place with the same name in Mohave County, Arizona, United States. It lies two miles south of the border with Utah in the Arizona Strip, and is supported by services in Utah as well as some in Nevada.

The population was 466 at the 2020 census. The community is historically Mormon, and presently also includes several families from breakaway Mormon groups. It has a small tourism industry because of nearby scenic hiking trails.

The CDP contained 168 housing units, of which 142 were occupied and 26 were vacant. 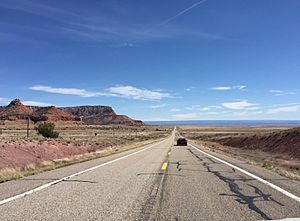 A two-mile stretch of Yellowstone Road in the Cane Beds area was renamed for LaVoy Finicum in 2017; while residents supported the motion, believing local man Finicum died defending his beliefs, the Mohave County Planning and Zoning Department only passed it 3-2, with the two opposing votes citing Finicum's lawlessness. Those who voted in favor said the move would celebrate the long history of Finicum's family in the area, not his armed activism. Reportedly, Finicum had previously requested that the stretch of road be named for him. It goes from Arizona State Route 389 (SR 389) to Cane Beds.

In 1950, there were efforts in the area to promote improvement of roads and infrastructure, and on March 14 that year a town hall-style meeting was held and an organization formed to better the community of Cane Beds and others nearby. Cane Beds Road is a stretch of county road 91 (former U.S. Route 91), and has a confluence with Interstate 15 (I-15) for about a mile. I-15 connects the town to Utah and Nevada. A railroad used to follow U.S. Route 89/89A where it passes by the town. SR 389 also passes close to Cane Beds.

The Cox Family Cemetery, also known as the Cane Beds Cemetery, is in the town. The town receives most of its local television from translators of Utah stations serving Hildale, with the exception of one Mohave County-owned translator of KSAZ-TV, the Fox station in Phoenix.

All content from Kiddle encyclopedia articles (including the article images and facts) can be freely used under Attribution-ShareAlike license, unless stated otherwise. Cite this article:
Cane Beds, Arizona Facts for Kids. Kiddle Encyclopedia.