Castres (Occitan: Castras) is a commune in the region of Midi-Pyrénées, in southwestern France. It is the sous-prefecture (capital) of the arrondissement of the same name in the Tarn department.

Castres is (after Toulouse, Tarbes and Albi) the fourth largest industrial centre of the mainly rural Midi-Pyrénées région and the largest in that part of Languedoc between Toulouse and Montpellier.

The name of the town comes from Latin castrum, and means "fortified place".

Castres grew up round the Benedictine abbey of Saint Benoît. Castres became an important stop on the international pilgrimage routes to Santiago de Compostela in Spain because its abbey-church, built in the 9th century, was keeping the relics of Saint Vincent, the renowned martyr of Spain. It was a place of some importance as early as the 12th century, and ranked as the second town of the Albigeois behind Albi.

The climate of Castres, in the Köppen climate classification, is Cfb - Oceanic climate with template summers.

The inhabitants of Castres are known, in French, as Castrais (women: Castraises).

Evolution of the population in Castres 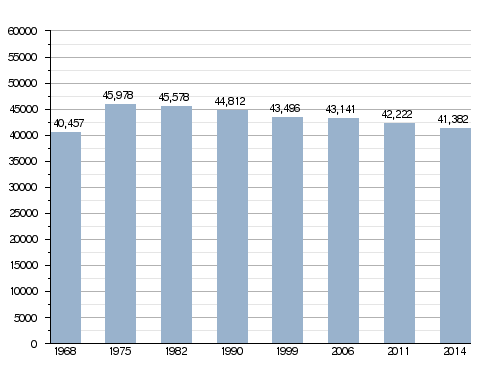 Castres is twinned with:

All content from Kiddle encyclopedia articles (including the article images and facts) can be freely used under Attribution-ShareAlike license, unless stated otherwise. Cite this article:
Castres, Tarn Facts for Kids. Kiddle Encyclopedia.