Kids Encyclopedia Facts
(Redirected from Centreville, Fairfax County, Virginia)
This page is about the census-designated place in Fairfax County. For other uses, see Centerville, Virginia.

Beginning in the 1760s, the area was known as Newgate due to the popularity of the conveniently-located Newgate tavern. William Carr Lane operated the tavern and was co-proprietor of a nearby store with James Lane, Jr. The Lanes sold convicted servants, which may explain why the tavern had the same name as a London prison. The small stream that passed near the tavern was named the River Thames, another London association. Another reason for it being named Newgate, was the fact that it was a "new gate" to the western territories.

The town of Centerville (shortly thereafter spelled Centreville) was established in 1792 on the turnpike road at the village of Newgate by the Virginia General Assembly in response to petitions by local landowners. The petitioners reasoned that a town on the turnpike road leading from the Northwest Territory and centrally located to Alexandria, Colchester, Dumfries, Middleburg, George Town (later Georgetown), Fauquier Court House (later Warrenton), and Leesburg would be convenient. The town acquired its name due to its central location. James Hardage Lane, one of the landowners, conceived the idea of the town as a way to provide financial support to his widow and their children. At the town's inception, it was within the boundary of Loudoun County, Virginia, and became part of Fairfax County, Virginia in 1798 when the boundary between the two counties shifted.

Town development established a pattern of mixed residential and commercial use. Frame houses, several taverns, stores, blacksmith shops, tanyards, and a school house were constructed on the 1/2 acre town lots. 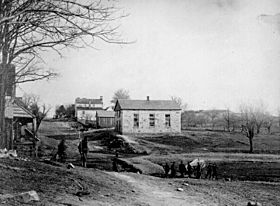 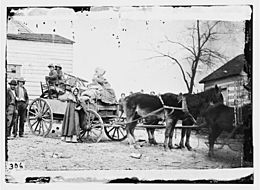 In the Civil War, several battles were fought nearby including the First Battle of Manassas, the Second Battle of Manassas, and the Battle of Chantilly. During the winter of 1861 and early 1862 the town was significantly fortified by the Confederacy and served as a supply depot for both sides at various points in the war, and is famous for being the site of the construction of the first railroad ever built exclusively for military use, the Centreville Military Railroad. Centreville was of significant strategic value due to its proximity to several important roads, while its position atop a high ridge provided a commanding view of the surrounding area. The town was frequently associated with Confederate Colonel John S. Mosby, whose partisan rangers used its hillsides and farms as a base of operations, leading to the sobriquet of Mosby's Confederacy.

In 1943, Centreville was still so small that a state map book individually, on a map of the entire county, indicated each building in the town (and also misspelled its name). In more recent times, Centreville has become a suburb of Washington, D.C. Most of the growth occurred in the late 1990s and early 2000s due the influx of technology companies and the ever-increasing area of the Washington, D.C. suburbs. Centreville is today a typical wealthy American suburb, composed of luxury townhomes, high-end supermarkets, strip malls, a movie theater, and large housing developments. Local newspapers such as The CentreView and the Fairfax Times now record local events and happenings in the community and surrounding communities such as Clifton.

Centreville is served by three major roads. U.S. Route 29 enters Centreville from the west and is the main artery through the town. Virginia Route 28 enters from the south and interchanges with U.S. Route 29 in between Centreville's two main shopping centers. SR 620 (Braddock Road) has several stretches of pavement in Centreville. Finally, Interstate 66 comes from the south-west and interchanges with both routes before heading off toward Washington, D.C. in the east or western Virginia. The three roads are part of an interesting, if not frustrating traffic pattern. Drivers heading north on SR 28 are able to exit onto Interstate 66 eastbound, but they must use a one-mile (1.6 km) stretch of US 29 to access the westbound side of the Interstate. Likewise, eastbound Interstate 66's Exit 53 only provides access to SR 28 northbound; one must use Exit 52 and the same stretch of US 29 to reach SR 28 south.

The area is served by several Fairfax Connector bus routes connecting to the Metrorail system: 640, 641, 642.

All content from Kiddle encyclopedia articles (including the article images and facts) can be freely used under Attribution-ShareAlike license, unless stated otherwise. Cite this article:
Centreville, Virginia Facts for Kids. Kiddle Encyclopedia.