Cherryville is a small city in northwestern Gaston County, North Carolina, United States. The population was 5,760 at the 2010 census. The New Year's Shooters celebrate the area's German heritage by beginning each year with a customary chant and the honorary shooting of muskets. Cherryville is located approximately 30 miles (48 km) west of Charlotte and 13 miles (21 km) northwest of Gastonia.

During the last half of the 18th century, German, Dutch, and Scots-Irish families from the Colony of Pennsylvania migrated south and settled in the Cherryville area. Land grants made by King George III of England date back to 1768, and as early as 1792 Governor Samuel Ashe of North Carolina made grants in and around "White Pine", as the settlement was known at the time. A village began to develop at a crossroads of the Morganton-to-Charleston road, closely followed by modern Highway 274 / Mountain Street, and the Old Post Road, a main thoroughfare between Salisbury, North Carolina, and Spartanburg, South Carolina.

In 1862, the Wilmington, Charlotte and Rutherford Railroad (later known as the Carolina Central Railroad) reached White Pine. Construction of the railroad westward from Cherryville was interrupted by the Civil War, so that throughout the war Cherryville was a western terminus of the railroads in North Carolina. When construction resumed and the railroad extended beyond Cherryville, the town served as a water and coal stop. Along the railroad, a local resident planted cherry trees, and the train engineers soon began calling the settlement "Cherryville". The town was incorporated under this name in 1881. 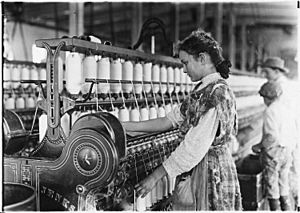 In 1932, a trucking company began operating in Cherryville with one truck hauling produce from Florida to Cherryville. This company would become one of the largest freight carriers in the nation, known as Carolina Freight Carriers Corporation. After operating for more than sixty years, Carolina Freight was bought by the Arkansas Best Trucking Company in October 1995, and operations moved from Cherryville.

The Beam's Shell Service Station and Office, (Former) was listed on the National Register of Historic Places in 1997.

There were 2,177 households out of which 27.6% had children under the age of 18 living with them, 51.6% were married couples living together, 12.5% had a female householder with no husband present, and 32.0% were non-families. 28.9% of all households were made up of individuals and 15.6% had someone living alone who was 65 years of age or older. The average household size was 2.34 and the average family size was 2.86.

The first church organized in Cherryville was Saint John's Evangelical Lutheran Church, established in 1881, the same year in which the town was incorporated. The congregation had the first church building in Cherryville as well, erected soon after the church's organization. It was replaced by the current structure in 1963.

The Cherryville Historical Museum preserves the history of the Cherryville area, and is open to the public each week during specified days. The C. Grier Beam Truck Museum, interpreting the history of freight trucking and Carolina Freight Carriers, is in the former Beam's Shell Service Station and Office, 117 N. Mountain St., and is listed on the National Register of Historic Places. The 1922 Noah Benjamin Kendrick House at 402 N. Mountain Street is a Designated Gaston County Historic Property. Recreational sites in Cherryville include the semi-private Cherryville Country Club, with a nine-hole golf course, on the northeast side of town.

Rudisill Stadium, completed in 1963 and located on the campus of Beam Intermediate School, is the largest sports venue in Cherryville and is used for several community events throughout the year.

All content from Kiddle encyclopedia articles (including the article images and facts) can be freely used under Attribution-ShareAlike license, unless stated otherwise. Cite this article:
Cherryville, North Carolina Facts for Kids. Kiddle Encyclopedia.