Chinatown in Manchester, England, is an ethnic enclave in the city centre. It is the second largest Chinatown in the United Kingdom and the third largest in Europe. It has an archway on Faulkner Street, which was completed in 1987, and contains many Chinese, Japanese, Korean, Nepali, Malaysian, Singaporean, Thai and Vietnamese restaurants, shops, bakeries and supermarkets.

The first settlers to arrive in the city came in the early 20th century; according to the BBC, "Many arrived alone and were engaged in what was seen as the traditional trade of laundries." Manchester's first Chinese restaurant, Ping Hong, opened on Mosley Street in 1948, on the eve of a Chinese immigration wave that would commence during the 1950s. Manchester did not have a significant Chinese population, reaching only about 2,000. However, after World War II, there were severe labour shortages, and in response, the government passed the British Nationality Act 1948, which allowed easier access into the country. Additionally, Hong Kong's rapid urbanisation meant that many farmers and traditional residents' homes were being destroyed by the urban sprawl, so many decided to migrate.

The area's beginnings are rooted in the restaurant business, as many Chinese restaurants surfaced soon after the immigration boom. By the 1970s other Chinese businesses began to emerge, such as medicine shops, Chinese supermarkets, as well as financial and legal services, all serving the employees of the expanding number of Chinese restaurants in the area. There was even a Hong Kong government office and a branch of The Hongkong and Shanghai Banking Corporation during the 1970s. In 1989 the Chinese Arts Centre opened in Chinatown. In 2013 the Bank of East Asia opted to open their first Manchester branch in Chinatown, situated on Charlotte Street. The branch officially opened on 25 October 2013, in a ceremony attended by the Lord Mayor of Manchester.

Chinatown is a small area of Manchester's city centre. Its boundaries form a rectangle, surrounded by Mosley Street to the west, Portland Street to the east, Princess Street to the south, and Charlotte Street to the north. However, these boundaries are not official; some maps extend Chinatown further south to Oxford Street. To the east lies the city's gay village, centred on Canal Street, and to the north lies Piccadilly Gardens. Being in the city centre, the area is entirely urbanised. Unlike Manchester city centre as a whole, Chinatown's streets appear largely in a grid plan. 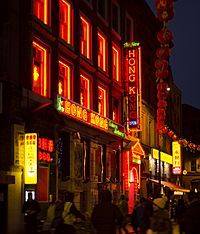 One of Chinatown's most noticeable landmarks is the archway, situated on Faulkner Street. The paifang, underneath which road traffic passes, was specially built in China and shipped over in three containers. Construction commenced over Christmas 1986 and was completed by Easter 1987, a year after the city of Manchester was twinned with Wuhan. The structure was a gift from Manchester City Council to the Chinese community, and is adorned with dragons and phoenixes.

However, after many years exposed to the elements, the arch required restoration work to be undertaken; netting was wrapped around a part of the structure to prevent further tiles from dislodging. The Manchester Chinatown Community Group undertook a series of charity events, including a dry land dragon boat race in June 2012. In early 2013 the archway had been successfully repaired, with restoration work being undertaken by Manchester and Cheshire Construction Company.

Another Chinatown landmark is the Guardian telephone exchange. The building is now owned by BT and used for communications work, though it was constructed for an entirely different usage. The building lies atop an underground bunker, constructed between 1949 and 1954 and paid for by NATO. The bunker was a fallout shelter designed to protect officials in the event of an atomic bomb and features over four miles of tunnels. The media were banned from revealing the bunker's existence until 1967 and it was built by Polish workers who could not speak English.

Chinatown also has a number of listed buildings, including 55 Faulkner Street, Manchester.

The area's nearest Metrolink stations are Piccadilly Gardens (which is also a bus interchange), and St Peter's Square tram stop. The nearest National Rail stations are Manchester Oxford Road to the south and Manchester Piccadilly to the east of Chinatown, the latter of which can be reached by Metrolink services. Furthermore, there is a car park off Faulkner Street for visitors driving into Chinatown in private vehicles. It is decorated in an oriental theme, in keeping with Chinatown, and a mural of a junk, a Chinese sea vessel, is contained within a brick wall overlooking the car park.

All content from Kiddle encyclopedia articles (including the article images and facts) can be freely used under Attribution-ShareAlike license, unless stated otherwise. Cite this article:
Chinatown, Manchester Facts for Kids. Kiddle Encyclopedia.