The specific epithet is named after the English-born Virginian botanist John Clayton. "Interrupted" describes the gap in middle of the blade left by the fertile portions after they wither and eventually fall off.

The plant is known from fossils to have grown in Europe, showing a previous circumboreal distribution. Fragmentary foliage resembling Claytosmunda claytoniana has been found in the fossil record as far back as the Triassic, and is known as †Osmunda claytoniites. C. claytoniana is a paramount example of evolutionary stasis. Paleontological evidence indicates it has remained unchanged, even at the level of fossilized nuclei and chromosomes, for at least 180 million years.

The fertile middle pinnae give the frond an "interrupted" gap 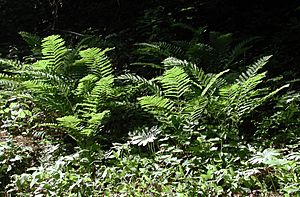 Claytosmunda claytoniana fronds are bipinnate, 40–100 cm (16–39 in) tall and 20–30 cm (8–12 in) broad, the blade formed of alternate segments forming an arching blade tightening to a pointed end. The lower end is also slightly thinner than the rest of the frond because the first segments are shorter. Three to seven short, cinnamon-colored fertile segments are inserted in the middle of the length, giving the plant its name.

In their absence, the plant in all its stages appears similar to Osmundastrum cinnamomeum (cinnamon fern). The base of the segments distinguishes the two species: where O. cinnamomeum has typical felt-like hairs, the few hairs present on C. claytoniana are extremely short, usually requiring a magnifying glass to see well.

Like other species in the family Osmundaceae, it grows a very large rhizome, with persistent stipe bases from previous years. It forms small, dense colonies, spreading locally through its rhizome, and often forming fairy rings.

The species was first described by Carl Linnaeus in 1753, as Osmunda claytoniana. In 2005, it was recognized as being somewhat different from other species in the genus by being placed in a separate subgenus, Osmunda subgenus Claytosmunda. In 2016, the subgenus was raised to a new genus, Claytosmunda, as part of the Pteridophyte Phylogeny Group classification (PPG I). The change of genus is recognized in some taxonomic databases. Others place the species in the genus Osmundastrum.

In eastern Asia, the fern is found in the subtropical and temperate Asia in: the Eastern Himalaya, South Central China and Eastern China, Taiwan, the Korean Peninsula, the Ryukyu Islands, and Japan.

Claytosmunda claytoniana is found in humid zones, mostly in forests, but also in more open habitats and biomes, although rarely in bogs. The interrupted fern is often found alongside ostrich, cinnamon, and sensitive ferns.

The Iroquois used the plant as treatment for blood disorders.

Unlike those of the ostrich fern, the interrupted fern's fiddleheads are not readily edible, due to their bitter taste and a tendency to cause diarrhea. The base of the stipe and very young buds are edible. Overuse may kill the crown.

Claytosmunda claytoniana is cultivated as an ornamental plant for use in traditional, native plant, and wildlife gardens; for woodlands and natural landscaping; and for habitat restoration projects. Their spreading colonizing habit can be used for some slope stabilization and erosion control measures.

All content from Kiddle encyclopedia articles (including the article images and facts) can be freely used under Attribution-ShareAlike license, unless stated otherwise. Cite this article:
Claytosmunda Facts for Kids. Kiddle Encyclopedia.