Climate of Ireland facts for kids 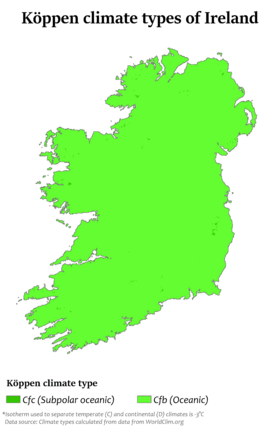 The climate of Ireland is mild, humid and changeable with abundant rainfall and a lack of temperature extremes. Ireland's climate is defined as a temperate oceanic climate, or Cfb on the Köppen climate classification system, a classification it shares with most of northwest Europe. The country receives generally warm summers and cool winters.

As Ireland is downwind of a large ocean, it is considerably milder in winter than other locations at the same latitude, for example Newfoundland in Canada or Sakhalin in Russia. The Atlantic overturning circulation, which includes ocean currents such as the North Atlantic Current and Gulf Stream, releases additional heat over the Atlantic, which is then carried by the prevailing winds towards Ireland, giving Ireland a milder climate than other temperate oceanic climates at similar latitudes, for example Seattle in the United States.

The prevailing wind blows from the southwest, breaking on the high mountains of the west coast. Rainfall is therefore a particularly prominent part of western Irish life, with Valentia Island, off the west coast of County Kerry, getting almost twice as much annual rainfall as Dublin on the east (1,400 mm or 55.1 in vs. 714 mm or 28.1 in).

January and February are the coldest months of the year, and mean daily air temperatures fall between 4 and 7 °C (39.2 and 44.6 °F) during these months. July and August are the warmest, with mean daily temperatures of 14 to 16 °C (57.2 to 60.8 °F), whilst mean daily maximums in July and August vary from 17 to 18 °C (62.6 to 64.4 °F) near the coast, to 19 to 20 °C (66.2 to 68.0 °F) inland. The sunniest months are May and June, with an average of five to seven hours sunshine per day. Though extreme weather events in Ireland are comparatively rare when compared with other countries in the European continent, they do occur. Atlantic depressions, occurring mainly in the months of December, January and February, can occasionally bring winds of up to 160 km/h or 99 mph to Western coastal counties, with the winter of 2013/14 being the stormiest on record. During the summer months, and particularly around late July/early August, thunderstorms can develop.

Ireland experiences a lack of temperature extremes compared to other areas at similar latitudes. There is regional variation, with inland areas being cooler in winter and warmer in summer than their coastal counterparts.

The warmest areas are found along the southwest coast. Valentia Island has the highest average temperature, at 10.9 °C.

The coldest areas are found inland. Mullingar has the lowest average temperature, at 9.3 °C

Extreme heat and cold are both rare throughout the country. Summer temperatures exceed 30 °C usually once or twice every decade (2016, 2013, 2006, 2005, 2003, 1995, 1990, 1989, 1983, 1976 and 1975 are recent examples), although they commonly reach the high 20s most summers, while severe freezes occur only occasionally in winter, with temperatures below -10 °C being very uncommon in the lowlands, and temperatures below freezing uncommon in many coastal areas, although temperatures in the Wicklow Mountains are said to reach -10 °C annually.

Frost is rarer along the coast, in urban areas and also in western and southern areas. 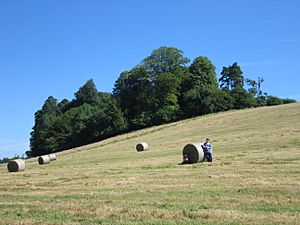 The sunniest months are May and June. During these months sunshine duration averages between 5 and 6½ hours per day over most of the country. The southeast gets the most sunshine, averaging over 7 hours a day in early summer. December is the dullest month with an average daily sunshine ranging from about 1 hour in the north to almost 2 hours in the southeast. Over the year as a whole most areas get an average of between 3¼ and 3¾ hours of sunshine each day. Irish skies are completely covered by cloud roughly half of the time.

The sunniest part of the island is the southeast coast. Rosslare, County Wexford is the sunniest area, and receives on average 4.38 hours of sunshine per day (1,598.41 hours per year).

The dullest, i.e., least sunny, part of the island is generally in the west and northwest of the country. However, Birr, County Offaly, in the midlands, is the dullest station, receiving on average 3.2 hours of sunshine per day, considerably less than the stations at Malin Head in the north or Belmullet in the west. Inland areas tend to receive less sunshine than coastal areas due to the convective development of clouds over land. Cloud develops because of vertical air currents caused by thermal heating of the ground. 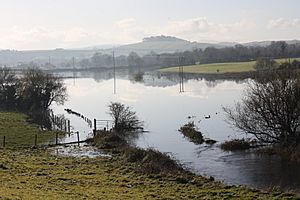 Flooded farmland in County Down

Rainfall is the most common form of precipitation on the island, and is extremely common throughout Ireland, although some parts of the west coast receive over four times as much rain as the east coast. Rainfall in Ireland normally comes from Atlantic frontal systems which travel northeast over the island, bringing cloud and rain. Most of the eastern half of the country has between 750 and 1,000 mm (29.5 and 39.4 in) of rainfall in the year. Rainfall in the west generally averages between 1,000 and 1,250 mm (39.4 and 49.2 in). In many mountainous districts rainfall exceeds 3,000 mm (118.1 in) per year. The wettest months almost everywhere are December and January. April is the driest month generally, but in many southern parts June is the driest.

The driest weather station is Casement Aerodrome, which receives 711.4 mm (28.01 in) of rain per year, on average. 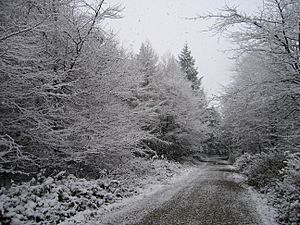 Severe cold weather is uncommon in Ireland with the majority of winter precipitation coming in the form of rain. Although hills and mountainous regions in the country can see up to 30 days of snowfall annually, and the Wicklow Mountains sometimes seeing 50 or more days of snowfall annually. Most low-lying regions of the island only see a few days of lying snow per year (from December to March inclusive), or may see no snow at all during some winters.

However, there are preparations for snow and ice, including the distribution of grit, salt, and other snow-treatable minerals. In late 2011, the Irish Government set up "Winter-Ready", in order to prepare the country for such severe weather.

Due to the variability of Ireland's weather (which is mainly because of the influence of the Atlantic Ocean, Gulf Stream and North Atlantic Drift, as well as Ireland's northerly latitude and vulnerability to Siberian/Arctic winds) weather during the winter months is difficult to predict, with the aforementioned factors making both extremely low temperatures and relatively mild temperatures possible.

Hail, like snow and sleet, is also rare in Ireland; however, it can occur at any time of the year. It is most common in spring during thunderstorms.

Malin Head, County Donegal receives the most hail, with an average of 48.4 days per year.

Roches Point, County Cork receives the least hail, with an average of 8.0 days per year.

Thunderstorms are quite rare in Ireland. They are more likely to happen late in summer, although they can occur at any time of the year.

Valentia Island, County Kerry experiences the most thunder; receiving it 7.1 days per year on average.

The station with the highest mean wind speed is Malin Head, County Donegal; averaging at 16.3 kn (30.2 km/h; 18.8 mph). Malin Head also receives the most gale-force winds, recording them on average 66.0 days per year.

The station that records the lowest number of gale-force winds is Birr, County Offaly; recording them on average 1.2 days per year.

Tornadoes are very rare in Ireland, with around less than ten reported every year - mostly in August. 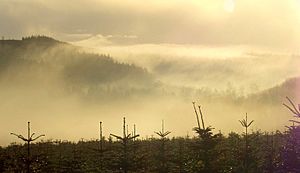 Fog in the Wicklow Mountains

Fog is more common inland and on higher altitudes; mainly during winter and during the morning at times of high pressure.

The foggiest station is that at Cork Airport, County Cork, which has 99.5 days of fog per year.

The least foggy station is that at Valentia Island, County Kerry, which has 8.9 days of fog per year.

Visibility is generally very good, because of the proximity of industry to the coast, allowing breezes to disperse any smog. Mist and fog often occur, as well as coastal fog in the east, but it is generally not long-lasting. However, in winter, it can be slow to clear.

All content from Kiddle encyclopedia articles (including the article images and facts) can be freely used under Attribution-ShareAlike license, unless stated otherwise. Cite this article:
Climate of Ireland Facts for Kids. Kiddle Encyclopedia.