Cuisine of Niger facts for kids

Kids Encyclopedia Facts
Not to be confused with Nigerian cuisine. 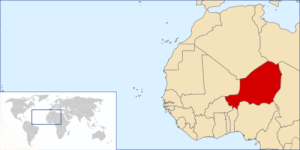 The cuisine of Niger draws on traditional African cuisines. Various spices are used and meals include grilled meat, seasonal vegetables, salads, and various sauces are some of the foods consumed. Meals in Niger usually start with colorful salads made from seasonal vegetables. Moringa leaves are a favorite for a salad.

Typical Nigerien meals consist of a starch (rice being the most popular) paired with a sauce or stew. The starches eaten most often are millet and rice. Staple foods include millet, rice, cassava, sorghum, maize and beans. Couscous is saved for special occasions. Porridge, wheat dumplings, and beignets are some of Niger's popular snacks.

Tea is a popular beverage in Niger.

Some spices were brought to Niger by Arabian travelers, and include ginger, nutmeg, cinnamon, saffron, and cloves. Hot spices are also used in Nigerien cuisine. Sometimes spices are used to marinate meats to add flavor. 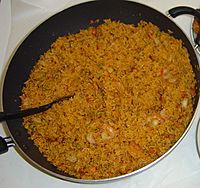 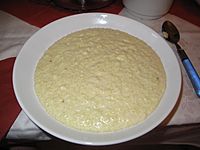 All content from Kiddle encyclopedia articles (including the article images and facts) can be freely used under Attribution-ShareAlike license, unless stated otherwise. Cite this article:
Cuisine of Niger Facts for Kids. Kiddle Encyclopedia.