Desert Hot Springs, also known as DHS, is a city in Riverside County, California, United States. The city is located within the Coachella Valley geographic region, sometimes referred to as the Desert Empire. The population was 25,938 at the 2010 census, up from 16,582 at the 2000 census. The city has undergone rapid development and high population growth since the 1970s, when there were 2,700 residents.

According to early homesteader and writer Cabot Yerxa in his newspaper columns published in The Desert Sentinel newspaper, the first homesteader in the area of the city of Desert Hot Springs was Hilda Maude Gray, who staked her claim in 1908. Cabot Yerxa arrived in 1913 and soon discovered the hot water aquifer on Miracle Hill. Due to the Mission Creek Branch of the San Andreas Fault bisecting the area, one side is a cold water aquifer, the other has a hot water aquifer. His large Pueblo Revival Style architecture structure, hand built over 20 years, is now one of the oldest adobe-style buildings in Riverside County, and houses Cabot's Pueblo Museum, designated a state historical site after his death in 1965. Cabot's Trading Post & Gallery opened there in February 2008.

The town was founded by L. W. Coffee on July 12, 1941. The original town site was centered at the intersection of Palm Drive and Pierson Boulevard and was only one square mile. Coffee chose the name Desert Hot Springs because of the area's natural hot springs. 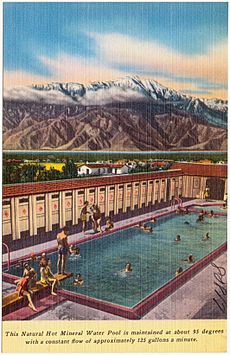 Desert Hot Springs became a tourist destination in the 1950s because of its small spa hotels and boutique hotels. The city is popular with "snowbirds."

Realtors arrived to speculate, and thousands of lots and streets were laid out over a six square mile area. Some homes were bought by retirees and the area incorporated as a city in 1963, with 1,000 residents.

Desert Hot Springs experienced periods of significant growth in the 1980s and 1990s, when most of the vacant lots were filled with new houses and duplex apartments. The city's population doubled in the 1980s and increased by 5,000 in the 2000 census.

In 1993, a 3-star hotel, Mirage Springs Hotel Resort opened in DHS. Despite good reviews and providing much needed financial revenue to DHS, Mirage Springs closed its doors in 1998. The business reopened as the Miracle Springs Resort and Spa.

Desert Local News, is an online news source. The Desert Star Weekly newspaper is published in the city.

Desert Hot Springs has a desert climate (Köppen climate classification BWh) similar to the rest of the Coachella Valley, with less than six inches of precipitation per year. Summers are very hot with days frequently exceeding 107 °F (42 °C) in July and August while night-time lows tend to stay between 78–90 °F (26–32 °C). The winters are mild with days typically seeing temperatures between 68–82 °F (20–28 °C) and corresponding night-time lows between 50–65 °F (10–18 °C). Heat waves during the summer months involving temperatures higher than 110 °F (43 °C) are not unusual.

The Mission Creek Fault, a branch of the San Andreas, separates two aquifers. On one side, the Desert Hot Springs Sub-Basin contains an aquifer with hot water. This aquifer supports the area's spas and resorts. Mission Springs Sub-basin, on the other side of the fault, the Miracle Creek sub-basin has cold water. This aquifer provides fresh water to the city and has received awards for exceptional taste.

According to the 2010 United States Census, Desert Hot Springs had a median household income of $32,883, with 28.6% of the population living below the federal poverty line.

There were 5,859 households out of which 38.7% had children under the age of 18 living with them, 39.3% were married couples living together, 17.9% had a female householder with no husband present, and 35.9% were non-families. 27.6% of all households were made up of individuals and 9.9% had someone living alone who was 65 years of age or older. The average household size was 2.8 and the average family size was 3.5.

Desert Hot Springs has a diverse population. Several racial or ethnic groups live there, with the largest group being of Mexican and Central American ancestry. There is a Korean American ethnic section of the city at 8th Street and Cholla Drive. Thousands of American Jews made the city their home. According to the Desert Chapter of the National Association for the Advancement of Colored People (NAACP), the city's population is over 10 percent African-American or Black. The city has a high proportion of Native Americans, most of whom are members of the Cahuilla tribe in proximity to the Agua Caliente Cahuilla tribal board in Palm Springs (see also Mission Creek Indian Reservation).

In 2001 the town filed for a Chapter 9 municipal bankruptcy. The bankruptcy was resolved in 2004 by selling municipal bonds when it faced a legal judgment of almost $6 million.

Desert Hot Springs is home to a number of hot mineral water spas. During the 1950s and 1960s the town had over 80 spa hotels, often called "spa-tels." From the late 1990s to the present a number of these boutique hotels have been renovated and revived. With their mid-century modern architecture they appeal to those wanting a unique hotel / spa experience.

One famous spa hotel property in Desert Hot Springs is the Two Bunch Palms Resort. In 1992 it was used as a filming location for the movie The Player. [1]

In 2001 Huell Howser Productions, in association with KCET/Los Angeles, featured the Desert Hot Springs Hotel and Spa in California's Gold.

At one time there were 43 small spas (6 to 10 guest rooms) in the city. Some were located atop the hot water aquifer on Miracle Hill, where Cabot Yerxa, one of the early settlers lived. His home is now Cabot's Pueblo Museum. Across the street is Miracle Manor Retreat, one of the first spas built (1949) in the town. It was built by the Martin Family who eventually sold it in 1981 to a local legend, Lois Blackhill. Upon her death in 1996, her family sold it in 1997, to two longtime regulars and close friends of Lois', trans-media designer April Greiman and architect-educator Michael Rotondi. It was restored to its original state, with improvements and renamed Miracle Manor Retreat. They are credited with pioneering the 'boutique spa' movement in the city. The Desert Hot Springs Motel, designed by architect John Lautner is located just outside the city limits. The motel was purchased and restored in 2000 by Steven Lowe.

In 2006 the architectural firm of Marmol Radziner + Associates designed a sustainable, modernist prefab home featured in the November 2006 issue of Dwell magazine. The home served as a prototype for the firm's efforts to develop a series of prefab homes.

All content from Kiddle encyclopedia articles (including the article images and facts) can be freely used under Attribution-ShareAlike license, unless stated otherwise. Cite this article:
Desert Hot Springs, California Facts for Kids. Kiddle Encyclopedia.