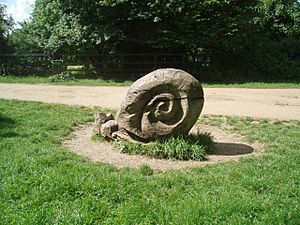 Snail sculpture at the entrance to Dinton Pastures Country Park

Dinton Pastures Country Park is a country park in the civil parish of St Nicholas Hurst, in the borough of Wokingham, near Reading in the English county of Berkshire.

The park is 450 acres (180 ha) in size. It has seven lakes, two rivers, three public bird hides, and meadows. One of the lakes, Lavells Lake is designated as a local nature reserve. The two rivers that flow through the park are the River Loddon and the Emm Brook. The Museum of Berkshire Aviation and the headquarters of the British Entomological and Natural History Society are both located in the park.

The site is popular for a number of sports including sailing, angling, kayaking, and canoeing. Other facilities include play areas and a cafe.

Anglo Saxons farmed the park's river meadows and called the area Whistley, where "wisc" means marshy meadows and "lei" means a woodland clearing. From the start of the 17th century, much of the area then belonged to Windsor Forest.

The present day cafe was originally a farmhouse built in 1904, which was called 'High Chimneys'. In 1924 the area was sold to a farmer who renamed the farm after his home village of Dinton, near Aylesbury.

The country park is part of the river Loddon's flood plain and so makes a good source of gravel, between 1969 and 1979 an extensive gravel extraction program was carried out. Much of the gravel was used for the M4 and the A329(M).

In 1979 Dinton Pastures was opened to the public. In 1992, part of the country park, Lavells Lake, was declared as a local nature reserve by Wokingham Borough Council.

The site has the following fauna:

The site has the following flora:

All content from Kiddle encyclopedia articles (including the article images and facts) can be freely used under Attribution-ShareAlike license, unless stated otherwise. Cite this article:
Dinton Pastures Country Park Facts for Kids. Kiddle Encyclopedia.