Florida is a state in the southeast United States. It is a peninsula, which means that water surrounds the state on three of four possible sides. To the west is the Gulf of Mexico, to the south is the Florida Straits, and to the east is the Atlantic Ocean. As of 2015, the population of Florida is 20,271,272.

Jacksonville is the most populous municipality in the state and is the largest city by area in the contiguous United States. The Miami metropolitan area is Florida's most populous urban area. The city of Tallahassee is the state capital.

The climate varies from subtropical in the north to tropical in the south. The American alligator, American crocodile, Florida panther, and manatee can be found in the Everglades National Park.

The state's economy relies mainly on tourism, agriculture, and transportation, which developed in the late 19th century. Florida is also renowned for amusement parks, orange crops, the Kennedy Space Center, and as a popular destination for retirees. 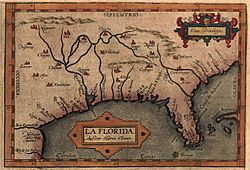 St. Augustine is the oldest city in Florida, established in 1565. The Spanish-Floridan color scheme of red and white is repeated throughout downtown.

By the 16th century, the earliest time for which there is a historical record, major Native American groups included the Apalachee (of the Florida Panhandle), the Timucua (of northern and central Florida), the Ais (of the central Atlantic coast), the Tocobaga (of the Tampa Bay area), the Calusa (of southwest Florida) and the Tequesta (of the southeastern coast).

Florida was the first part of the continental United States to be visited and settled by Europeans. The earliest known European explorers came with the Spanish conquistador Juan Ponce de León. Ponce de León spotted and landed on the peninsula on April 2, 1513. He named the region La Florida ("land of flowers"). The story that he was searching for the Fountain of Youth is a myth.

A lot of south Florida used to be covered by a swamp called the Everglades. When Florida was first being settled, farmers found out the soil there was very good for growing plants. So they could use more of the land to plant, they drained a lot of the water away in 1882. In 1947, the state put in levees and canals to make more room for farming and houses. The Everglades is now about half the size it used to be. Most of what is left is now the Everglades National Park. Lots of animals live there, including alligators and Florida panthers. Recently, Florida has been trying to restore the Everglades. 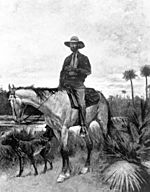 On March 3, 1845, Florida became the 27th state to join the United States of America. The state was admitted as a slave state and ceased to be a sanctuary for runaway slaves.

Until the mid-20th century, Florida was the least populous Southern state. In 1900 its population was only 528,542, of whom nearly 44% were African American, the same proportion as before the Civil War. The boll weevil devastated cotton crops.

Forty thousand blacks, roughly one-fifth of their 1900 population, left the state in the Great Migration.

Historically, Florida's economy was based upon agricultural products such as cattle farming, sugarcane, citrus, tomatoes, and strawberries.

Economic prosperity in the 1920s stimulated tourism to Florida and related development of hotels and resort communities. 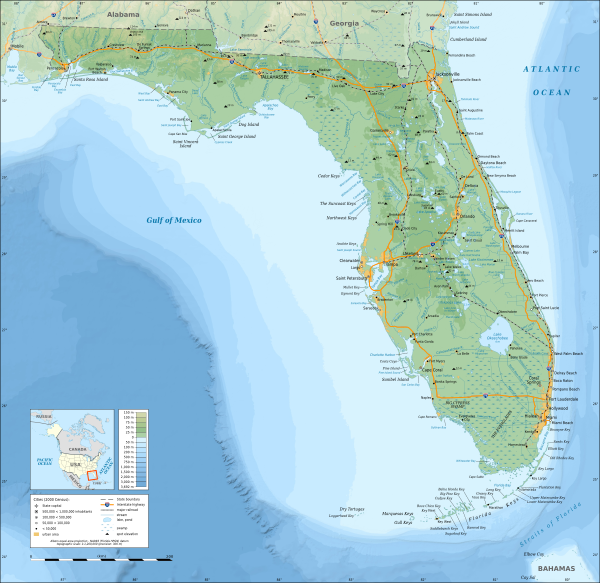 A topographic map of Florida. 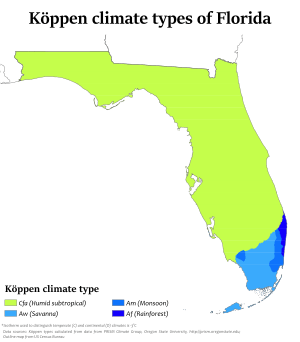 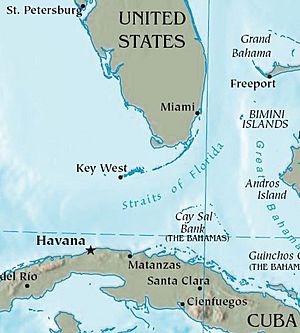 Florida and its relation to Cuba and The Bahamas.

At 345 feet (105 m) above mean sea level, Britton Hill is the highest point in Florida and the lowest highpoint of any U.S. state. Much of the state south of Orlando lies at a lower elevation than northern Florida, and is fairly level. Much of the state is at or near sea level.

On average, Florida is the flattest state in the United States.

Main pages: Climate of Florida and Geography of Florida#Climate

The climate of Florida is a humid subtropical, while areas south of the lake (including the Florida Keys) have a true tropical climate.

Due to its subtropical and tropical climate, Florida rarely receives snow. However, on rare occasions, a combination of cold moisture and freezing temperatures can result in snowfall in the farthest northern regions. Frost is more common than snow, occurring sometimes in the panhandle.

Florida's nickname is the "Sunshine State", but severe weather is a common occurrence in the state.

Central Florida is known as the lightning capital of the United States, as it experiences more lightning strikes than anywhere else in the U.S. Florida has one of the highest average precipitation levels of any state, in large part because afternoon thunderstorms are common in much of the state from late spring until early autumn.

Florida leads the United States in tornadoes per area (when including waterspouts) but they do not typically reach the intensity of those in the Midwest and Great Plains. Hail often accompanies the most severe thunderstorms.

Hurricanes pose a severe threat each year during the June 1 to November 30 hurricane season, particularly from August to October. Florida is the most hurricane-prone state, with subtropical or tropical water on a lengthy coastline.

Florida was the site of one of the costliest weather disasters in U.S. history, Hurricane Andrew, which caused more than $25 billion in damage when it struck in August 1992.

Further information: List of mammals of Florida and Snakes of Florida 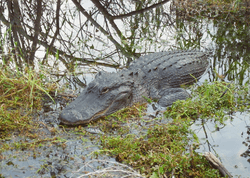 An alligator in the Florida Everglades. 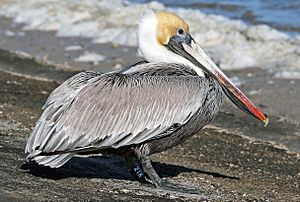 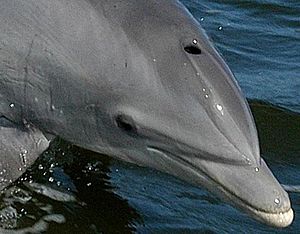 Florida is host to many types of wildlife including:

The only known calving area for the northern right whale is off the coasts of Florida and Georgia.

Since their accidental importation from South America into North America in the 1930s, the red imported fire ant population has increased its territorial range to include most of the Southern United States, including Florida. They are more aggressive than most native ant species and have a painful sting.

A number of non-native snakes and lizards have been released in the wild. In 2010 the state created a hunting season for Burmese and Indian pythons, African rock pythons, green anacondas, and Nile monitor lizards. Green iguanas have also established a firm population in the southern part of the state.

There are about 3,000 different types of wildflowers in Florida. This is the third most diverse state in the union, behind California and Texas, both larger states. 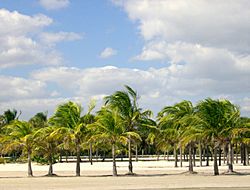 The beaches of Key Biscayne in Miami.
Main page: Environment of Florida

Red tide has been an issue on the southwest coast of Florida, as well as other areas. While there has been a great deal of conjecture over the cause of the toxic algae bloom, there is no evidence that it is being caused by pollution or that there has been an increase in the duration or frequency of red tides.

The Florida panther is close to extinction.

Much of Florida has an elevation of less than 12 feet (3.7 m), including many populated areas. Therefore, it is susceptible to rising sea levels associated with global warming. 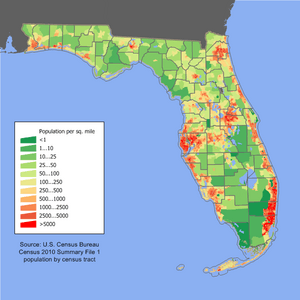 Florida contains the highest percentage of people over 65 (17%) in the US. There were 186,102 military retirees living in the state in 2008. About two-thirds of the population was born in another state, the second highest in the U.S.

The legal name in Florida for a city, town or village is "municipality". In Florida there is no legal difference between towns, villages and cities.

Largest cities or towns in California 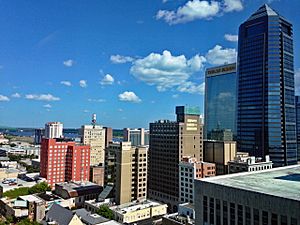 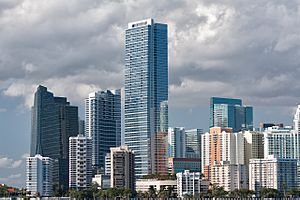 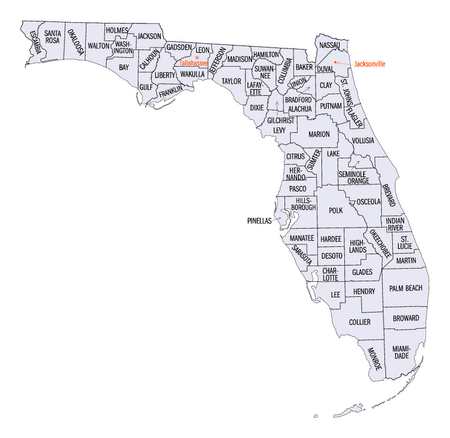 A map of Florida showing county names and boundaries.

In 2010, 6.9% of the population (1,269,765) considered themselves to be of only American ancestry (regardless of race or ethnicity). Many of these were of English or Scotch-Irish descent; however, their families have lived in the state for so long, that they choose to identify as having "American" ancestry or do not know their ancestry. In the 1980 United States census the largest ancestry group reported in Florida was English with 2,232,514 Floridians claiming that they were of English or mostly English American ancestry. Some of their ancestry went back to the original thirteen colonies. 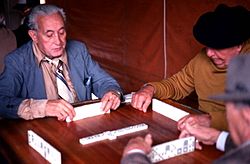 During the early 1900s, black people made up nearly half of the state's population. In response to segregation, disfranchisement and agricultural depression, many African Americans migrated from Florida to northern cities in the Great Migration, in waves from 1910 to 1940, and again starting in the later 1940s.

In 1988 English was affirmed as the state's official language in the Florida Constitution. Spanish is also widely spoken, especially as immigration has continued from Latin America. Twenty percent of the population speak Spanish as their first language. Twenty-seven percent of Florida's population reports speaking a mother language other than English, and more than 200 first languages other than English are spoken at home in the state.

The most common languages spoken in Florida as a first language in 2010 are: 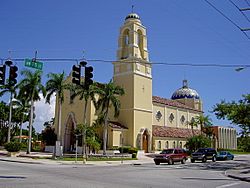 Miami Cathedral of Saint Mary. Roman Catholicism is the largest single religious denomination in the state.

Florida is mostly Protestant, but Roman Catholicism is the single largest denomination in the state, due in significant part to the state's large Hispanic population. There is also a sizable Jewish community, located mainly in South Florida; this is the largest Jewish population in the South and the third-largest in the U.S. behind those of New York and California.

The Port of Miami is the world's largest cruise ship port. 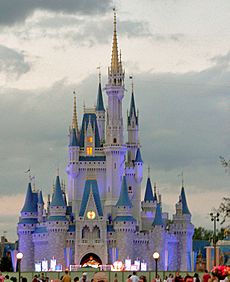 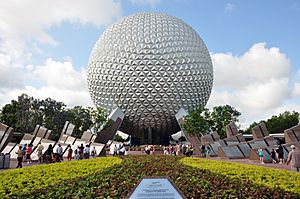 Tourism makes up one of the largest sectors of the state economy, with nearly 1.4 million people employed in the tourism industry in 2016. In 2015, Florida broke the 100-million visitor mark for the first time in state history.

Many beach towns are popular tourist destinations, particularly during winter and spring break. Twenty-three million tourists visited Florida beaches in 2000, spending $22 billion. The public has a right to beach access under the public trust doctrine, but some areas have access effectively blocked by private owners for a long distance. 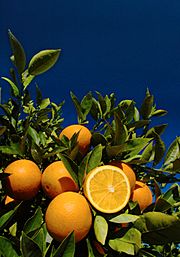 Agriculture is the second largest industry in the state. Citrus fruit, especially oranges, are a major part of the economy, and Florida produces the majority of citrus fruit grown in the United States. In 2006, 67% of all citrus, 74% of oranges, 58% of tangerines, and 54% of grapefruit were grown in Florida. About 95% of commercial orange production in the state is destined for processing (mostly as orange juice, the official state beverage).

Other products include sugarcane, strawberries, tomatoes and celery. The state is the largest producer of sweet corn and green beans for the U.S.

In 2009, fishing was a $6 billion industry, employing 60,000 jobs for sports and commercial purposes.

The Miami Civic Center has the second-largest concentration of medical and research facilities in the United States.

Florida is the leading state for sales of powerboats. Boats sales totaled $1.96 billion in 2013.

Phosphate mining, concentrated in the Bone Valley, is the state's third-largest industry. The state produces about 75% of the phosphate required by farmers in the United States and 25% of the world supply, with about 95% used for agriculture (90% for fertilizer and 5% for livestock feed supplements) and 5% used for other products. 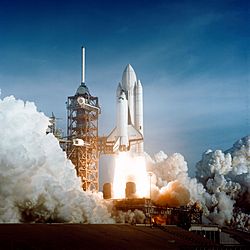 Launch of Space Shuttle Columbia from the Kennedy Space Center

Since the development of the federal NASA Merritt Island launch sites on Cape Canaveral (most notably Kennedy Space Center) in 1962, Florida has developed a sizable aerospace industry. 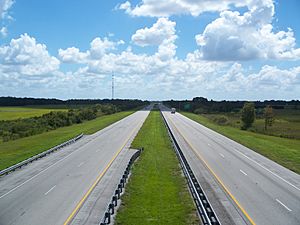 In 2011, there were about 9,000 retail gas stations in the state. Floridians consume 21 million gallons of gasoline daily, ranking it third in national use. 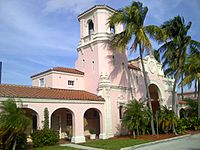 Florida is served by Amtrak, operating numerous lines throughout, connecting the state's largest cities to points north in the United States and Canada.

All Aboard Florida is a proposed higher-speed rail service that would run between Orlando and Miami at speeds up to 125 mph. Its Miami to Cocoa portion is scheduled to open in 2016, with the final segment to Orlando opening in 2017.

All content from Kiddle encyclopedia articles (including the article images and facts) can be freely used under Attribution-ShareAlike license, unless stated otherwise. Cite this article:
Florida Facts for Kids. Kiddle Encyclopedia.