In 2019, North Carolina's total gross state product was around $591 billion. 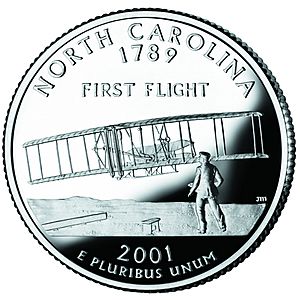 According to the Bureau of Economic Analysis, the state's 2010 total gross state product was $424.9 billion, making it the ninth wealthiest state in terms of gross domestic product. Its 2007 per capita personal income was $33,735, placing 36th in the nation. North Carolina's agricultural outputs include poultry and eggs, tobacco, hogs, milk, nursery stock, cattle, sweet potatoes, and soybeans.

There has been a distinct difference in the economic growth of North Carolina's urban and rural areas. While large cities such as Charlotte, Raleigh, Greensboro, and others have experienced rapid population and economic growth over the last thirty years, many of the state's small towns have suffered from loss of jobs and population. Most of North Carolina's small towns historically developed around textile and furniture factories. However, North Carolina has been affected by offshoring and industrial growth in countries like China; one in five manufacturing jobs in the state has been lost to overseas competition. As these factories closed and moved to low-wage markets in Asia and Latin America, the small towns that depended upon them have suffered. 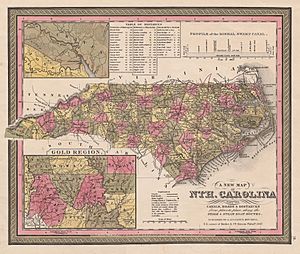 The responsibilities in regulatory and service areas covering different aspect of Agriculture and manufacturing are overseen by the North Carolina Department of Agriculture and Consumer Services. Over the past century, North Carolina has grown to become a national leader in agriculture, financial services, and manufacturing. The state's industrial output—mainly textiles, chemicals, electrical equipment, paper and pulp and paper products—ranked eighth in the nation in the early 1990s. The textile industry, which was once a mainstay of the state's economy, has been steadily losing jobs to producers in Latin America and Asia for the past 25 years, though the state remains the largest textile employer in the United States. Over the past few years, another important Carolina industry, furniture production, has also been hard hit by jobs moving to Asia (especially China).

North Carolina is the leading producer of tobacco in the country. As one of North Carolina's earliest sources of revenue, it remains vital to the local economy.

Agriculture in the western counties of North Carolina (particularly Buncombe and surrounding counties) is experiencing a revitalization coupled with a shift to niche marketing, fueled by the growing demand for organic and local products.

CNBC's list of "Top States for Business for 2010" has recognized North Carolina as the fourth-best state in the nation, behind Texas, Virginia and Colorado.

North Carolina is an at-will employment state, meaning employees in the private sector may be dismissed without prior notice or reason.

Charlotte, North Carolina's largest city, continues to experience rapid growth, in large part due to the banking & finance industry. Charlotte is now the second largest banking center in the United States (after New York), and is home to Bank of America. The Charlotte metro area is also home to 8 other Fortune 500 companies.

BB&T (Branch Banking & Trust), one of America's largest banks, was founded in Wilson, North Carolina in 1872. Today, BB&T's headquarters is in Winston-Salem, although some operations still take place in Wilson.

The information and biotechnology industries have been steadily on the rise since the creation of the Research Triangle Park (RTP) in the 1950s. Located between Raleigh, Durham, and Chapel Hill, it is a globally prominent research center home to over 170 companies and federal agencies and is the largest and oldest continuously operating research and science park in the United States. Anchored by the University of North Carolina in Chapel Hill, Duke University in Durham, and North Carolina State University in Raleigh, the park's proximity to these research universities has no doubt helped to fuel growth. 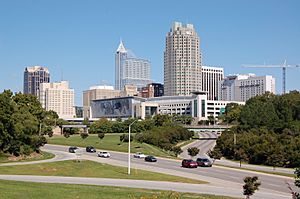 The North Carolina Research Campus underway in Kannapolis (approx. 30 miles (48 km) northeast of Charlotte) aims to enrich and bolster the Charlotte area in the same way that RTP changed the Raleigh-Durham region. Encompassing 5,800,000 square feet (540,000 m2), the complex is a collaborative project involving Duke University, University of North Carolina at Charlotte, University of North Carolina at Chapel Hill, and N.C. State University, along with private and corporate investors and developers. The facility incorporates corporate, academic, commercial and residential space, oriented toward research and development (R&D) and biotechnology.

Similarly, in downtown Winston-Salem, the Piedmont Triad Research Park is undergoing an expansion. Approximately thirty miles to the east of Winston-Salem's research park, University of North Carolina at Greensboro and North Carolina A&T State University have joined forces to create the Gateway University Research Park, a technology-based research entity which will focus its efforts on areas such as nanotechnology, biotechnology & biochemistry, environmental sciences, and genetics among other science-based disciplines.

Film and the arts

Film studios are located in Shelby, Raleigh, Durham, Charlotte, Asheville, Wilmington, and Winston-Salem. Wilmington is the home of EUE Screen Gems Studios, the largest domestic television and film production facility outside of California. "Dream Stage 10," the facility's newest sound stage, is the third-largest in the US. It houses the largest special-effects water tank in North America. Since the studio's opening in 1984, Wilmington has become a major center of American film and television production with more than 300 productions under its belt. Some of the best-known films and television series filmed in the state include: Forrest Gump, Bull Durham, Richie Rich, Divine Secrets of the Ya-Ya Sisterhood, All the Real Girls, The Secret Life of Bees, Being There, Blue Velvet, A Walk to Remember, Glory, The Color Purple, Cabin Fever, Super Mario Bros., Cape Fear, Children of the Corn, The Crow, Cyborg, Dawson's Creek, Dirty Dancing, Evil Dead II, The Fugitive, The Green Mile, Hannibal, The Last of the Mohicans, Maximum Overdrive, Nell, One Tree Hill, Patch Adams, Junebug, Shallow Hal, Talladega Nights: The Ballad of Ricky Bobby, Teenage Mutant Ninja Turtles III, Leatherheads, Nights in Rodanthe and 28 Days. Half of Stephen King's films were filmed in North Carolina.

Tourism destinations in the state include amusement parks, golf, wineries, beaches, mountains, and sports venues. The North Carolina tourism industry employs more than 190,000 people. The state is the 6th most visited in the country (preceded by Florida, California, New York, Nevada and Pennsylvania). The North Carolina Department of Commerce maintains a Tourism Services providing matching funds and consultation for development tourism in the state including rural tourism.

North Carolina personal income tax is flat, with a 5.75% rate. The base state sales tax is 4.25%. Most taxable sales or purchases are subject to the state tax as well as the 2.5% local tax rate levied by all counties, for a combined 6.75%. Mecklenburg County has an additional 0.5% local tax for public transportation, bringing sales taxes there to a total 7.25%. In addition, there is a 30.2¢ tax per gallon of gas, a 45¢ tax per pack of cigarettes, a 79¢ tax on wine, and a 48¢ tax on beer. There are also additional taxes levied against food, normally totaling 2%, and some counties assess a 1% tax on prepared food.

All content from Kiddle encyclopedia articles (including the article images and facts) can be freely used under Attribution-ShareAlike license, unless stated otherwise. Cite this article:
Economy of North Carolina Facts for Kids. Kiddle Encyclopedia.