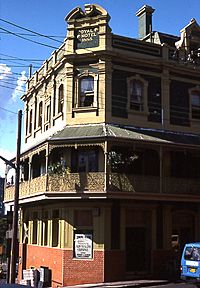 Five Ways is a junction of streets at the heart of Paddington, Sydney, Australia, situated three hundred metres north of Oxford Street. The junction is formed by the intersection of Glenmore Road, Goodhope Street, Heeley Street and Broughton Street. There are numerous cafes, shops and bars in the area.

At the intersection there is a variety of 19th- and 20th-century buildings, including the Royal Hotel (1888), built in a mixture of Classical and Victorian styles.

Streets in the area

All content from Kiddle encyclopedia articles (including the article images and facts) can be freely used under Attribution-ShareAlike license, unless stated otherwise. Cite this article:
Five Ways, Paddington Facts for Kids. Kiddle Encyclopedia.