The Folly Farm Adventure Park and Zoo (also known as Folly Farm), situated to the north of Saundersfoot and Tenby in Pembrokeshire, is a visitor attraction in Wales with around 500,000 visitors each year. Initially a farm attraction, the park is now also home to an indoor vintage funfair, a zoo with over 200 different species of animal and extensive indoor and outdoor adventure play areas.

The original farm has expanded and now covers a significant part of the park including a large undercover Jolly Barn area featuring horses, goats, sheep, pigs and smaller petting animals. Folly Farm is made up of four areas: a farmyard; a zoo; an undercover vintage funfair, including a Wurlitzer organ; There is a daily timetable of "meet-and-greet" sessions and visitors may hand-milk goats at certain times of the day. The park has expanded to the other side of the A478 road where more animals can be found in outdoor paddocks. A tractor-driven land-train ride touring the outdoor paddocks, operates between late-morning and mid-afternoon.

In 2013, Folly Farm added Penguin Coast, a state-of-the-art saltwater penguin enclosure which is home to 24 Humboldt penguins and was the setting for an unusual proposal of marriage.

In 2014, Folly Farm opened Pride of Pembrokeshire, to house six African lions. This was followed in 2015 by Kifaru Reserve, a breeding facility for eastern black rhino, as part of its membership of 14 European Endangered Species Breeding Programmes (EEPs). In 2020, Folly Farm took in 12 Macaroni penguins who had been made homeless by the closure of their Devon zoo, making it the only home to the vulnerable species population in the UK.

A limited company, Folly Farm is owned and operated by the Williams and Ebsworth families and holds Investors in People status with 90 full-time employees and an additional 100 seasonal members of staff.

Folly Farm started life as a dairy farm. After noticing that families were stopping by the roadside to pet and watch their cattle, the farmer Glyndŵr Williams and his wife Anne decided to diversify into tourism. In 1988, the dairy farm was converted to receive visitors; now guests could stop to visit the Folly Farm cows and see them being milked. Over the last 25 years Folly Farm has grown with continued reinvestment. The first zoo animals arrived at the park in 2002.

Winner of the Wales Tourist Board's 2005 Best Day Out in Wales award, and again in 2010, and in 2015. In 2009, winner of Pembrokeshire Tourism's Best Family Day Out award. Folly Farm was named 10th best zoo in the world in the 2017 Tripadvisor Travellers' Choice Awards. 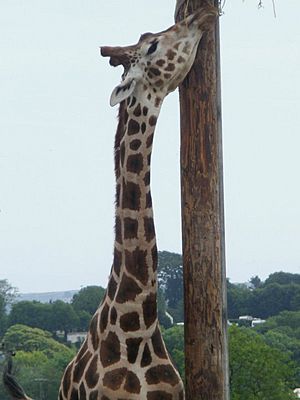 The founder Glyndŵr Williams was born in 1944 in Haverfordwest and his parents George and Margaret moved to Folly Farm when he was two years of age. He died on 18 February 2020 following a long illness.

All content from Kiddle encyclopedia articles (including the article images and facts) can be freely used under Attribution-ShareAlike license, unless stated otherwise. Cite this article:
Folly Farm Adventure Park and Zoo Facts for Kids. Kiddle Encyclopedia.