Kids Encyclopedia Facts
Not to be confused with De Soto National Memorial located south of the Manatee River in Bradenton.

The park is a gateway site for the Great Florida Birding Trail. 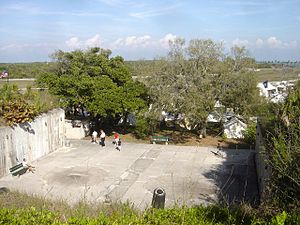 In 1849, Brevet Col. Robert E. Lee (the famous American Civil War commander) and three other US Army Engineers surveyed the area and recommended Mullet and Egmont Keys become fortified. Both keys could only be reached by boat, since they were islands off the mainland. Union troops were stationed on the two keys during the Civil War (1861–1865) to aid in the Union blockade of Tampa Bay. The keys were again abandoned by the military until 1882 when military reservations were officially created on the two keys. However, it would be several years before actual permanent construction would commence as a result of defense considerations linked to the Spanish–American War.

The main operation on Mullet Key, however, became Fort De Soto in 1900, named for Spanish explorer Hernando de Soto. The Army post was officially a subpost of Fort Dade, which was constructed on Egmont Key. These posts were to contain batteries of artillery and mortars to protect Tampa Bay from any invading forces. Construction of Fort De Soto began in November 1898 and was completed in 1906. The foundation was constructed of a shell concrete formula and the walls and ceiling used a shell, stone and concrete mix. The main attractions at the completed post were the artillery and 12-inch coast defense mortar batteries, Batteries Laidley and Bigelow. The post consisted of 29 buildings. The post's features included a large barracks, a hospital, a guardhouse, a blacksmith and carpenter shop, an administration building, and mess hall with kitchen, a bakery, and a storehouse. The site also had brick roads, concrete sidewalks and a narrow-gauge railroad to aid in moving materials and supplies around the post.

The post was active from 1898 to 1910. At least one company was present at Fort De Soto at all times and many times several units were present. Mosquitoes were a constant problem and the post was very hot in the summers.

In 1910 most troops were moved to Fort Morgan in Alabama. Only a caretaker force remained. By 1914 only a sergeant and game warden remained at the post. Through most of World War I a larger caretaker force was at the post, usually with about 22 privates, two noncommissioned officers and two commissioned officers. In 1917 four of the post's mortars were disassembled and shipped to Fort Rosecrans, in San Diego, California. 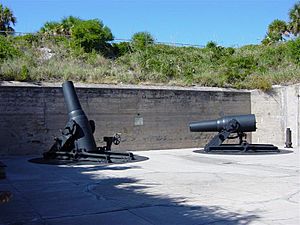 In November 1922 the Army announced it would soon close both Forts De Soto and Dade. On May 25, 1923, the forts were officially abandoned and only one caretaker remained at each post. A number of tropical storms and hurricanes severely damaged the buildings on the post. A few were destroyed, as was Battery Bigelow in 1932. The Army attempted to sell the post, but there was little interest. In September 1938 Pinellas County bought the areas on Mullet Key for $12,500.

Shortly after Pinellas County purchased Mullet Key from the Federal government in 1938, county commissioners granted a lease to Percy L. Roberts for the use of land and buildings on the island that the Mullet Key Quarantine Service had once used. The St. Petersburg Times reported the Commission's action on page 7 of their January 25, 1939 edition with ...

"Lease of Mullet Key buildings to Percy Roberts was ratified Monday by county commissioners who made no change in the tentative lease approved last week.”

"The lessee will operate a daily boat service to the island and will serve fish dinners and rent fishing tackle. The distance from the his dock near the Bee Line ferry will be 10 miles. He will land in a sheltered cove on the north end of the island. Trips will be started in about three weeks."

Mr. Roberts, a native of St. Petersburg and local plumbing contractor, had a simple business plan. First, run a passenger boat to Mullet Key to facilitate access to the isolated island. This service was expected to attract both fishermen and sightseers. For the fishermen, easy access to the pristine fishing waters of lower Tampa Bay; for the sightseers, easy access to the ruins of historic Fort DeSoto and the white-sand beaches facing the Gulf of Mexico. Secondly, establish a hotel and restaurant on the island. Mr. Roberts envisioned creating a venue on the island appealing to clubs, associations and other organizations for group outings of members for fishing, sightseeing, and "dining on fried mullet".

With lease in hand and business plan formulated, and with the financial support of Mr. Charles R. Carter, a local insurance executive and president of the Bee Line Ferry Co., Mr. Roberts immediately began implementing his plan.

For transportation to the isolated island, the passenger boat Hobo was put into service. Hobo operated daily from the Bee Line Ferry Terminal at St. Petersburg's Pinellas Point, pulling away from the dock early morning and leaving for the return trip late afternoon. Hobo was also available for chartered trips in between scheduled runs. Interestingly, “by boat” was not the only means of transportation to the island. A strip of land on the island was cleared in response to requests by some who wanted to fly small aircraft in and out.

Lodging and eating accommodations on the island were fashioned by renovating a building vacated by the Quarantine Service in 1937. The facility at best was austere, but one who was tired and hungry could get a good night's sleep; plenty of coffee, a hearty serving of bacon and eggs for breakfast; any of an assortment of sandwiches for lunch; and, a family style meal of fried mullet with all the trimmings for supper. A screened-in porch was there for those who just wanted to lean back, prop up the feet, enjoy a cool beverage, and relax. This facility became known familiarly as Mullet Key Lodge.

Rubert "Rube" Allyn, a writer for the St. Petersburg Times, included in his March 28, 1939 column, ALONG THE WATERFRONT ... "When the Pinellas county commissioners leased the old Fort DeSoto, and Mullet Key to Percy Roberts, they did a fine thing for the tourists by opening up the vast uninhabited reaches of Mullet Key and the old fort to exploration parties.“ Allyn went on, “Today for a nominal fee, one can take a boat at Pinellas Point, and go to Mullet Key, land at the old Quarantine dock, enjoy an old-fashioned fish dinner prepared in the same manner as the pioneers of 50 years ago, by the Roberts family, and explore miles of uninhabited beaches, bayous, and the old Spanish-American War fort ... "

In less than two years, Mullet Key Lodge became well established and profitable. However, this first for-profit business founded on the island was short-lived. The lease, granted to Mr. Roberts in 1939, had to be rescinded because the War Department decided it wanted the island back for use as a bombing range by the U.S. Army Air Corps in support of air bases then being constructed in the Tampa Bay area. That pending transaction was reported by the St. Petersburg Times on December 18, 1940, page 2. Excerpts from that report ...

“Mullet Key purchased by the county from the Treasury department in 1938 for $12,500 will soon be taken over by the United States Army Air Corps for use as a bombing range. The Air Corps will pay the county all that has been expended to date and will pay to Capt. Charles R. Carter all he has expended in improving the building into a fishing lodge. It is understood that Capt. Carter has an investment of about $8,000 while the county’s total investment is about $13,800."

In June 1941, the Federal government bought back Mullet Key from Pinellas County for $18,404. As planned, It was turned into a sub-post of MacDill Field and used as a bombing range throughout World War II.

After World War II, the by then-renamed U.S. Army Air Forces had no need for Mullet Key and it was a sold back to Pinellas County along with adjacent islands Sister Key, Hospital Key, Rattlesnake Key, and Scratch Key. The sale, for $26,495.54, was finalized in 1948. County officials immediately designated Fort DeSoto and all of Mullet Key a county recreational area and declared it open to the public. Soon thereafter excursion passenger boats began regularly scheduled trips to the island.

In 1962, a toll road, the Pinellas Bayway (formerly State Road A19A, now SR 682), was completed to the mainland, enabling island visitors to arrive by car. On December 21, 1962, Fort De Soto Park opened. On May 11, 1963, Fort De Soto Park was officially dedicated. Its facilities have been expanded over the years. The quartermaster storehouse was reconstructed to become the Quartermaster Storehouse Museum. On December 2, 1977, the Fort De Soto batteries were placed on the National Register of Historic Places. The four 12-inch M1890 mortars and two 6-inch Armstrong guns at Fort DeSoto are the only weapons of their type remaining in the United States.

In 2003, a portion of the Marvel comic-inspired film "The Punisher" was filmed on Mullet Key and Fort Desoto as a mock-up of Puerto Rico.

The area of Fort De Soto for over 400 years has attracted a variety of visitors. Among the earliest was the Tocobaga Indians, who preceded the Spanish conquistadors who began the European entrance into the Florida peninsula.

On April 15, 1528, Panfilo de Narváez landed on the shore of the west coast of Florida between present-day St. Pete Beach and Clearwater. This Spanish explorer with a group of soldiers explored the barrier islands here. Further exploration began on May 30, 1539, when the Hernando de Soto expedition landed on the shores of the estuary now called Tampa Bay . 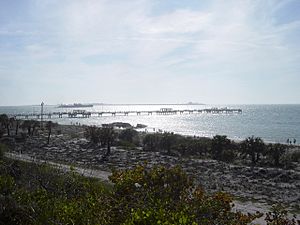 Fishing pier juts out into the Gulf of Mexico

The park is open year-round and has the following features:

All content from Kiddle encyclopedia articles (including the article images and facts) can be freely used under Attribution-ShareAlike license, unless stated otherwise. Cite this article:
Fort De Soto Park Facts for Kids. Kiddle Encyclopedia.