Future of the Earth facts for kids 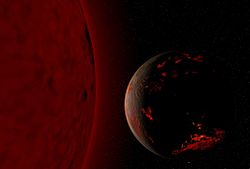 Drawing of the Earth after the Sun goes into the red giant phase, seven billion years from now.

The future of the Earth will depend on many things, including increases in the brightness of the Sun, loss of heat energy from the Earth's core and change of the planet's orbit by the other things in the Solar System. The Milankovitch theory says the planet will continue to go into glaciation cycles because of the planet's difference in orbit from a perfect circle, the axis of the planet tilting, and pushing of the Earth's orbit. As part of the supercontinent cycle, plate tectonics may create a supercontinent within 250 million–350 million years. Some time in the next 1.5 billion–4.5 billion years, the axis's tilt may begin to change into bad versions, with changes in the axis's tilt of up to 90°.

One billion to two billion years in the future, the increase in solar radiation caused by the helium build-up at the core of the Sun will result in the loss of the oceans and the cessation of continental drift. Four billion years from now, the increase in the Earth's surface temperature will cause a bad greenhouse effect. By that point, most if not all the life on the Earth will be gone. The most likely fate of the planet is being destroyed by the Sun in about 7.5 billion years, after the star has entered the red giant phase and expanded to cross the planet's orbit.

See also: Stellar evolution and Formation and evolution of the Solar System

The energy generation of the Sun is based upon changing of hydrogen into helium. This occurs in the core region of the star.

When the Sun first became a main sequence star, it radiated only 70% of the current luminosity. The luminosity has increased in a nearly linear fashion to the present, increasing by 1% every 110 million years. In three billion years the Sun is expected to be 33% more luminous. The hydrogen fuel at the core will finally be limited in 4.8 billion years, when the Sun will be 67% more luminous than at present. Thereafter the Sun will continue to burn hydrogen in a shell surrounding its core, until the increase in luminosity reaches 121% of the present value. This marks the end of the Sun's main sequence lifetime, and thereafter it will be into a red giant.

All content from Kiddle encyclopedia articles (including the article images and facts) can be freely used under Attribution-ShareAlike license, unless stated otherwise. Cite this article:
Future of the Earth Facts for Kids. Kiddle Encyclopedia.