Kids Encyclopedia Facts
This page is about the town in Essex. For the village in Kent, see Halstead, Kent. For other uses, see Halstead (disambiguation).

Halstead is a town and civil parish in the Braintree District of Essex, England. Its population of 11,906 in 2011 was estimated to be 12,161 in 2019. The town lies near Colchester and Sudbury, in the Colne Valley. It developed initially on the hill to the north of the river. The name Halstead is said to derive from the Old English hald (refuge, shelter, healthy) and stede (site, place or farm), meaning "healthy farm" or "place of refuge". 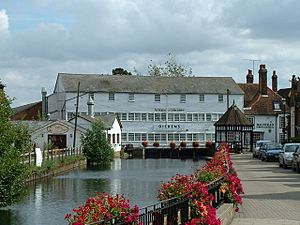 The wide High Street is dominated by the 14th century church of St Andrew, which was extensively renovated during the Victorian period but retains much earlier decoration including tomb monuments dating from the 14th century and earlier.

The historic core of Halstead can be observed on a walk up the market hill. A river walk runs through the town from east to west, and just outside the town is Broaks Wood, a popular area for walking owned by the Forestry Commission. Halstead Public Gardens were established in 1900 and is noted for its floral displays. Townsford Mill that spans the river at the bottom of the town houses the Antiques Centre, with thousands of interesting pieces ranging from clothing to household items. In 1818, Samuel Courtauld built two mills, Townsford at Halstead and another at Bocking. At the end of 1824 Halstead Mill was sold to Stephen Beuzeville. In 1825, Samuel. installed a steam engine at Bocking Mill. An agreement dated 19 January 1825 was drawn up between Beuzeville and Samuel Courtauld and his partners for the conversion of Halstead Mill for silk throwing. Beuzeville was to provide the expertise, capital, and supply the silk; Courtauld was to erect the machinery power looms and operate the mill in return for a share in the profits; Beuzeville was to take delivery of the yarn and manufacture the crêpe for which he was a technical expert of 20 years experience. The mill appears to have been in operation by the summer of 1825, with Joseph Ash as manager.

The introduction of new technology was important but the mills still remained heavily dependent on manpower, or more accurately, woman-power. The looms required supervision by an army of young female workers and even in 1838, more than 92% of the workforce was female.

In 1827 Stephen Beuzeville was declared bankrupt; a formal deed of sale dated 11 April 1828 was created between the commissioners in bankruptcy and Samuel Courtauld, whereby Halstead Mill (subject to charges of £300) was sold to Courtaulds for a cash payment of £1,500. Stephen and his father joined Courtaulds as employees.

Halstead has a library situated in a large open-plan building that was built as the corn exchange (1864-1866) but has also housed a technical school. Nearby Moyns Park, a Grade I listed Elizabethan country house, is said to have been where Ian Fleming put the finishing touches on his novel From Russia, with Love.

A historical society holds regular monthly meetings and a town museum attached to the town council offices features some historical artefacts and various objects limited to local interest. The Empire Theatre in Butler Road hosts occasional bingo nights. Halstead is also home to Hume's Bakery, which opened in 1960, and trades at the same shop today.

Halstead's main football club is Halstead Town F.C. It plays in the 10th tier of the English football league system, in the Eastern Counties Football League Division One.

The town is home to Halstead Cricket Club, which fields three teams in the Marshall Hatchick Two Counties Championship. For the 2011 season the club, with the help of club member and former Bangladesh bowling coach Ian Pont brought in Bangladeshi international cricketer Syed Rasel. Other players to have played both first-class cricket and for the club include former Essex and Leicestershire batsman Darren Robinson, international coach Richard Pybus and New Zealand double World Cup finalist Matt Henry.

Since 2010 the town has a rugby club, Halstead Templars R.F.C.

All content from Kiddle encyclopedia articles (including the article images and facts) can be freely used under Attribution-ShareAlike license, unless stated otherwise. Cite this article:
Halstead Facts for Kids. Kiddle Encyclopedia.