Heath is a town in Franklin County, Massachusetts, United States. The population was 706 at the 2010 census. It is part of the Springfield, Massachusetts Metropolitan Statistical Area. 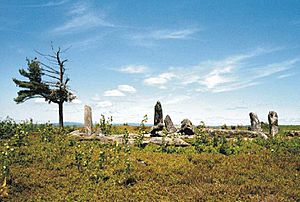 Heath was first settled in 1765 as a part of Charlemont. The town, as well as neighboring Rowe, separated, and Heath was officially incorporated in 1785, just a few days after its new neighbor. The town is named after William Heath, Major General of Massachusetts and Brigadier General in the national army during the American Revolution.

General Heath had been the commanding officer and friend of Col. Hugh Maxwell, a local citizen who suggested the town be named in his honor. In 1784 Maxwell, who was severely wounded at the Battle of Bunker Hill by a bullet through his shoulder, was chosen to represent Heath at the General Court in Boston and obtain a division of the town from Charlemont. Accordingly, the new town was incorporated on February 14, 1785.

Chloe Maxwell, daughter of Col. Maxwell, was married to prominent local landowner and state legislator abolitionist Roger Leavitt. Their son was the Congregational minister, lawyer, social reformer, editor and fervent abolitionist Rev. Joshua Leavitt, who after his graduation from Yale College was the first lawyer to practice in Heath. (Rev. Leavitt soon gave up law for the ministry, training at Yale Theological Seminary and settling in Stratford, Connecticut, before decamping for New York City and a career that included the editorship of The Emancipator.) Members of the Leavitt family of Heath and Charlemont provided stops on the Underground Railroad, and in some cases sheltered slaves like Basil Dorsey who were fleeing the South.

The town had some farming and other small industry in the nineteenth century, but much of it is gone now, leaving the town as a rural area. One of its more distinctive industries was a straw hat business, where palm fronds were imported from the Carolinas to be woven by women and children during their free time. Each year, the Heath Agricultural Society hosts the Heath Fair, a small agriculturally-focused fair held two weekends before Labor Day.

According to the United States Census Bureau, the town has a total area of 24.9 square miles (64 km2), of which 24.9 square miles (64 km2) is land and 0.04 square miles (0.10 km2), or 0.08%, is water. Heath lies along the Vermont border between Franklin and Windham counties. Heath is bordered by Whitingham and Halifax, Vermont, to the north, Colrain to the east, Charlemont to the south and southwest, and Rowe to the west. Heath is located 17 miles (27 km) northwest of Greenfield, 49 miles (79 km) north-northwest of Springfield, and 106 miles (171 km) west-northwest of Boston.

Heath is located in the northeastern portion of the Berkshires, with the highest point being Burnt Hill to the southeast. Heath is fed by the West Branch of the North River, which originates near the state line and heads south-eastward towards Colrain. Several brooks also feed into this and the nearby Deerfield River, and there is a large settlement around Papoose Lake, which drains into the Taylor Brook and eventually the North River.

There were 292 households out of which 35.3% had children under the age of 18 living with them, 62.7% were married couples living together, 5.5% had a female householder with no husband present, and 27.1% were non-families. 19.9% of all households were made up of individuals and 6.8% had someone living alone who was 65 years of age or older. The average household size was 2.76 and the average family size was 3.19.

During the 1970s and 1980s, many families from New York, Connecticut, and Maine moved to Heath.

All content from Kiddle encyclopedia articles (including the article images and facts) can be freely used under Attribution-ShareAlike license, unless stated otherwise. Cite this article:
Heath, Massachusetts Facts for Kids. Kiddle Encyclopedia.