Rowe is a town in Franklin County, Massachusetts, United States. The population was 424 at the 2020 census. It is part of the Springfield, Massachusetts Metropolitan Statistical Area. 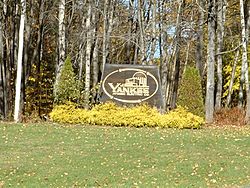 Rowe was the site of fishing and foraging for local Native American tribes. The area was first visited by white settlers in 1744, and was the site of a fort to guard against raids. In 1762, the town lands were purchased by the Rev. Cornelius Jones, who named it "Myrifield" after the Greek word for "thousand". The town had enough settlers by 1785 to have it incorporated as a town, renamed by the Massachusetts General Court after John Rowe, a prominent Boston merchant.

The town of Rowe grew around mills on the river, but also had other industries, including sulfur, talc and soapstone mining. This was nowhere more evident than in the now abandoned settlement at the Davis Mine. In the late 1880s, with the addition of the railroad along the river, the area had become somewhat of a small resort town. But, by the advent of the 1900s, most industry had begun to dry up, leaving the town fairly rural until the 1950s. At that point, with the "baby boom" underway, Rowe became the site of Yankee Rowe Nuclear Power Station, the first nuclear power plant in New England, near the Sherman Dam along the Vermont border. The plant was in operation from 1960 to 1992, and the plant is now completely decommissioned, with the nuclear waste set to be transported to Yucca Mountain's containment facilities upon their completion in 2020.

The following are locally known neighborhood/village areas within the Rowe town borders: 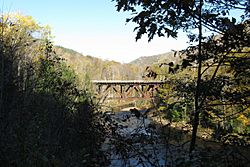 Railroad bridge across the Deerfield River between Monroe and Rowe

According to the United States Census Bureau, the town has a total area of 24.0 square miles (62.2 km2), of which 23.4 square miles (60.7 km2) is land and 0.58 square miles (1.5 km2), or 2.41%, is water. Rowe lies along the northern border of Franklin County and Massachusetts, bordered by Windham County, Vermont, to the north and Berkshire County to the west. The town is bordered by Whitingham, Vermont, to the north, Heath to the east, Charlemont to the south, and Florida and Monroe to the west. Rowe is located 23 miles (37 km) west-northwest of Greenfield, 53 miles (85 km) north-northwest of Springfield, and 112 miles (180 km) west-northwest of Boston.

Rowe lies along the eastern bank of the Deerfield River, which is dammed near the Vermont border to form the Sherman Reservoir. The town has two other large bodies of water, the Upper Bear Swamp Reservoir and Pelham Lake, which feeds Pelham Brook, a tributary of the river. The town is hilly, with two main ridges on either side of Pelham Brook. Near the southwest corner of town is Negus Mountain, along the western ridge, and along the eastern ridge lies Todd Mountain and Adams Mountain, the highest point in town. Much of the land southeast of Pelham Lake is part of Pelham Lake Park, which extends to the mountains. There are also two small units of Monroe State Forest in town.

Rowe is one of a handful of small towns in Massachusetts which has no state highways. (Nearly half of these towns are on Martha's Vineyard and Nantucket, with the majority of the rest in central and western Massachusetts.) The nearest state highways are Massachusetts Route 8A, which runs through neighboring Heath, and Route 2 (the Mohawk Trail), which runs through Charlemont and Florida. The nearest expressway, Interstate 91, passes through the center of the county, near the junction of the Deerfield River and the Connecticut River. A short section of railroad tracks leading westward to the Hoosac Tunnel passes through the southwest corner of town, but the town is otherwise not served by rail, bus or air service. The nearest bus and small air service is in North Adams, the nearest Amtrak service is in Pittsfield, and the nearest national air service can be reached at Albany International Airport in New York.

There were 154 households, of which 22.7% had children under the age of 18 living with them, 59.1% were married couples living together, 5.8% had a female householder with no husband present, and 31.8% were non-families. Of all households 26.0% were made up of individuals, and 11.0% had someone living alone who was 65 years of age or older. The average household size was 2.28 and the average family size was 2.75.

The Rowe Historical Society, located at 282 Zoar Road, operates the Kemp-McCarthy Museum. Information on the museum, its collections and the calendar of special events is available at www.rowehistoricalsociety.org.

The former mining village, and current ghost town, of Davis, Massachusetts is located in the eastern part of town, near Pelham Lake.

Rowe's school system is a sub-system in the nine-town Mohawk Trail Regional School District, which serves much of western Franklin County. Town students attend the Rowe Elementary School from pre-kindergarten through sixth grades, and all students in the district attend Mohawk Trail Regional High School in Buckland. There is a private academy in neighboring Charlemont, and other private and religious schools in nearby North Adams.

All content from Kiddle encyclopedia articles (including the article images and facts) can be freely used under Attribution-ShareAlike license, unless stated otherwise. Cite this article:
Rowe, Massachusetts Facts for Kids. Kiddle Encyclopedia.