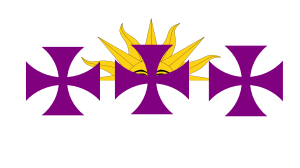 The flag symbolizes the three carabelas that took Christopher Columbus to America.

Hispanidad (literally Hispanicness) is the community formed by all the people and nations that share Spanish language and culture. The 23 nations included are all Spanish-speaking except the Philippines, and can be classified in four geographic areas: Spain, Hispanoamerica, Hispanoafrica and the Hispanopacific. Every October 12 Hispanic Day is celebrated. Hispanidad or Spanish linguistic and cultural diffusion began when the 12 October 1492 Christopher Columbus sighted America and initiated the European colonization in the name of the Catholic Monarchs of Spain. The kingdom of Castile (Castilla) built a global empire, spreading their culture and language in the Americas and biologically and culturally mixing with the indigenous peoples, altering the composition of the hemisphere. The penetration and reach of Spain at this time also extended into other European nations.

The Hispanics in the world

In Europe, Hispanics are mainly confined to Spain. There are more than 30 million of them.

Hispanics in the African continent are mostly in overseas territories of Spain (Canary Islands, Ceuta, Melilla and Plazas de Soberanía) and in the nation of Equatorial Guinea. In Morocco and Western Sahara some people maintain Hispanic characteristics. Altogether in Africa two million speak Spanish.

All content from Kiddle encyclopedia articles (including the article images and facts) can be freely used under Attribution-ShareAlike license, unless stated otherwise. Cite this article:
Hispanidad Facts for Kids. Kiddle Encyclopedia.