Horncastle is a market town in Lincolnshire, England, 17 miles (27 km) east of the county town of Lincoln. Horncastle had a population of 6,815 at the 2011 Census.

Although fortified, Horncastle was not on any important Roman roads, which suggests that the River Bain was the principal route of access.

Roman Horncastle has become known as Banovallum (i.e. "Wall on the River Bain") – this name has been adopted by several local businesses and by the town's secondary modern school. But, the Roman name for the settlement is not definitely known: Banovallum was suggested in the 19th century through an interpretation of the Ravenna Cosmography, a 7th century list of Roman towns and road-stations. Banovallum may have been Caistor.

The Roman walls remain in places — one section is on display in the town's library, which was built over the top of the wall. The Saxons called the town Hyrnecastre, from whence its modern name was derived.

Horncastle is listed in the 1086 Domesday Book as consisting of 41 households, including twenty-nine villagers and twelve smallholders, and had 100 acres (0 km2) of meadow and two mills, all belonging to King William.

Dating from the 13th century prior to the Reformation, the Anglican parish church is dedicated to Saint Mary. In the Early English style, it is a Grade II*listed building. It was extensively restored between 1859 and 1861 by Ewan Christian.

Four miles from Horncastle is the village of Winceby. During the 1643 Battle of Winceby – which helped to secure Lincolnshire for Parliament – leader Oliver Cromwell was almost killed. Local legend has it that the thirteen scythe blades, which hang on the wall of the south chapel of St. Mary's Church, were used as weapons at Winceby. This story is generally regarded as apocryphal. The accepted historical opinion is that they probably date from the Lincolnshire Rising of 1536. Both theories about the origin of the scythes are discussed at "Church History", Lincoln website.

Horncastle was granted its market charter by the Crown in the 13th century. It was long known for its great August horse fair, an internationally-famous annual trading event which continued to be held until the mid-20th century. It ended after the Second World War, when horses were generally no longer used for agriculture. The town is now known as a centre for the antiques trade.

The great annual horse fair was probably first held in the 13th century. The fair used to last for a week or more every August. In the 19th century it was likely the largest event of its kind in the United Kingdom. The slogan, "Horncastle for horses," was an indication of the town's standing in this trade. George Borrow set some scenes of his semi-autobiographical books, Lavengro and The Romany Rye, at the annual horse fair. The last horse fair was held in 1948.

In 1894 the Stanhope Memorial, designed by E. Lingen Barker, was erected in the centre of the Market Place in memory of Edward Stanhope (MP). Built of limestone, red sandstone and pink and grey streaked marble, it is a Grade II listed structure.

The Grade II listed Old Court House, built in 1865, is in the town centre on Louth Road.

Since the late 20th century, the population has increased to 6,815 in 2011, its highest ever. Historically, the civil parish suffered a decline in population from the mid-19th to mid-20th century, as urbanisation and changes in agriculture attracted people to cities where more work was available.

Horncastle is twinned with Bonnétable, a ville de marché (market town) in the French département of Sarthe with a population of 4,000 (approximately). The towns' relationship is commemorated by a Rue Horncastle in Bonnétable, and a Bonnetable (sic; no acute accent on the 'e') Road in Horncastle.

It lies to the south of the Lincolnshire Wolds, where the (north-south) River Bain meets the River Waring (from the east), and north of the West and Wildmore Fens. The south of Horncastle is called Cagthorpe. Langton Hill is to the west. It used to be part of Horncastle Rural District in the Parts of Lindsey, but is now in the district council of East Lindsey, based in Manby, east of Louth. 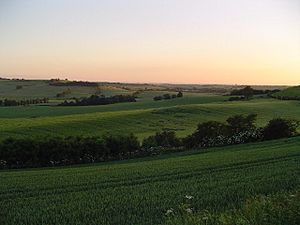 Looking from the Lincolnshire Wolds southwards towards Horncastle

North of the town, the civil parish meets West Ashby and Low Toynton, south of Milestone House on the A153 (Louth Road). The boundary skirts the east of the town, crossing Low Toynton Road, following the Viking Way then meeting the River Waring. It briefly follows north of the A158, to a caravan park, where it meets High Toynton. Southwards on Mareham Road it meets Mareham on the Hill, east of Stonehill Farm. South of the town, and north of Telegraph House, it meets Scrivelsby, following High Lane westwards to cross the B1183, south of Loxley Farm, then the A153 and skirts the southern edge of the sewage works next to the River Bain where it meets Roughton (Thornton). It follows the Old River Bain west of the A153 northwards across the river meadows, crossing the Horncastle Canal (and Viking Way). Eastwards it crosses the B1191, south of Langton Hill, where at Lowmoor Lane it meets Langton. It follows Langton Lane northwards, with Mill House Farm (Langton Mill) to the west, meeting Thimbleby. It meets the B1190 where the pylons cross the road then the A158 at the B1190 junction, briefly following Accommodation Road to the east. It skirts the north of the town, briefly following Elmhurst Road, passing south of Elmlea Farm. and straight through Elmhirst Lakes. At the River Bain near Hemingby Lane, it meets West Ashby.

Horncastle sits at the crossroads of two of Lincolnshire's major roads: the A158 runs west-east, joining the county town of Lincoln with the resort of Skegness on the Lincolnshire coast; the A153 joins Louth in the north with Sleaford and Grantham in the south. These two roads meet at the 'Bull Ring' in the centre of Horncastle.

The A158 through Horncastle becomes busy during the summer holidays, as holidaymakers travel between Horncastle and Skegness. To alleviate pressure on the town centre caused by this traffic, a relief road, Jubilee Way, was constructed in the 1970s. Minor roads run from Horncastle to Bardney, Boston (via Revesby), Fulletby and Woodhall Spa.

Horncastle is home to a 'hub' for the InterConnect rural bus service. Regular buses run to Lincoln, Skegness and across the Wolds. The Viking Way long-distance footpath also runs through Horncastle.

The Great Northern Railway's Lincoln-Boston line ran through Kirkstead, 8 miles (12.9 km) from Horncastle, and a branch line from Kirkstead (later renamed Woodhall Junction) through Woodhall Spa to Horncastle opened on 11 August 1855. The last passenger service ran in 1954, with complete closure to goods traffic in 1971. Horncastle railway station was demolished in the 1980s and the site is now a housing estate. Today the nearest railway station is Metheringham on the Peterborough to Lincoln Line. The Horncastle Branch was a line that ran from Woodhall Junction to Horncastle, and is now the Viking Way.

Horncastle Canal, based upon the River Bain, was constructed from 1792 and opened in 1802.
In 2004 it was suggested that the Horncastle Canal (originally opened in 1802) be renovated with the help of private capital, and promoted as a route for pleasure craft, as has successfully been achieved in other areas. A local kickstart programme raised ₤ for the project. 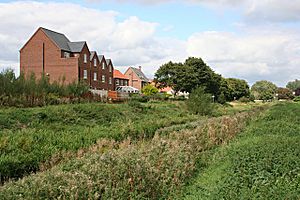 New housing by the River Bain

Folklore belief associates the occurrence of floods with the installation of new vicars in Horncastle's Anglican Church. The vicar changed in 1919 and 1959, both less than a year before a flood. The flooding of the early 1980s was attributed to the change of vicar in 1980; however, there was no flooding in Horncastle following the change of vicar in 1999. Both the River Bain and River Waring overflowed their banks during the 2007 United Kingdom floods.

Flooding also occurred in 2012. A £15 million, 30-year-old proposed flood defence scheme was seen as unlikely to have prevented the 2012 flood, but new means of flood defences are being discussed. An anti-flood pump was installed in 2013.

Real-time river levels are available from the Environment Agency: and flood warnings for the town:

All content from Kiddle encyclopedia articles (including the article images and facts) can be freely used under Attribution-ShareAlike license, unless stated otherwise. Cite this article:
Horncastle, Lincolnshire Facts for Kids. Kiddle Encyclopedia.