Louth is a market town and civil parish in the East Lindsey district of Lincolnshire, England. Louth is the principal town and centre for a large rural area of eastern Lincolnshire attracting visitors for its market, Lincolnshire's last remaining cattle market, and many independent retailers.

The Greenwich Meridian passes through the town and is marked on Eastgate with a plaque on the north side of the street, just east of the junction with Northgate. The three-mile (5 km) £6.6 million A16 Louth Bypass opened in 1991. The former route through the town is now designated as the B1520. 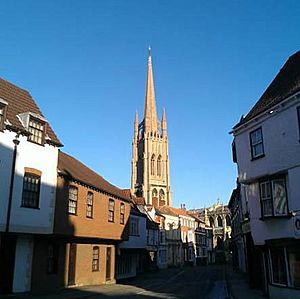 Three handaxes have been found on the wolds surrounding Louth, dating from between 424,000 and 191,000 years ago, indicating inhabitation in Paleolithic era. Bronze Age archeological finds include a 'barbed and tanged' arrowhead found in the grounds of Monks' Dyke Tennyson College.

St Helen's Spring, at the Gatherums, off Aswell Street, is dedicated to a popular medieval saint, the mother of Constantine the Great, the first Roman Emperor to become a Christian, but is thought to be a Christianised Romano-British site for veneration of the pagan water-goddess Alauna.

The Anglo-Saxon pagan burial ground, northwest of Louth, dates from the fifth to sixth centuries, and was first excavated in 1946. With an estimated 1200 urn burials it is one of the largest Anglo-Saxon cremation cemeteries in England.

Æthelhard, a Bishop of Winchester who was made Archbishop of Canterbury in 793, was an abbot of Louth in his early life.

Louth is listed in the 1086 Domesday Book as a town of 124 households.

Louth Park Abbey was founded in 1139 by the Bishop Alexander of Lincoln as a daughter-house of the Cistercian Fountains Abbey in Yorkshire. Following its dissolution in 1536 it fell into ruin and, today, only earthworks survive, on private land, between Louth and Keddington. Monks' Dyke, now a ditch, was originally dug to supply the abbey with water from the springs of Ashwell and St. Helen's at Louth.

In 1643, Sir Charles Bolles, a resident of Louth, raised a 'hastily-got-up soldiery' for the Royalist cause in the English Civil War. Fighting took place in, and around the town and, at one point, Bolles was forced to take refuge under the Ramsgate bridge. By the battle's end 'Three strangers, being souldgeres, was slain at a skirmish at Lowth, and was buryed'. Human remains, found during archaeological visits to Louth Park Abbey during the 1800s, in 'a little space surrounded by a ditch', were believed to date from the Civil War as two cannonballs, from that era, were found with the bodies. 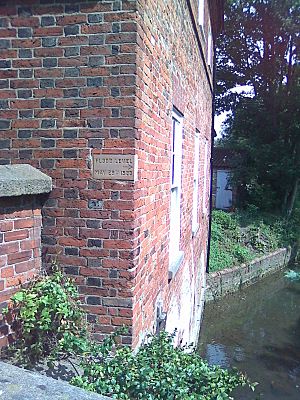 The Louth flood of 1920 occurred in the town on 29 May 1920, causing 23 deaths. One woman climbed a chimney to survive, another was the only survivor from a row of twelve terrace houses, which were destroyed by the flood waters. Four stone plaques exist in the town to show how high the water level reached. Other, less devastating floods occurred on 25 June and 20 July in 2007.

St Herefrith, or Herefrid, is Louth's 'forgotten saint', whose feast day is 27 February. He was a bishop, who died around 873, possibly killed by the Danes. An 11th-century text describes Herefrith as Bishop of Lincoln, but as the bishopric there dates to 1072, Lincoln more probably refers to Lindsey, the early name for Lincolnshire. Similar confusion exists in an inventory of Louth's St. James Church, written in 1486 and transcribed in 1512, where he is referred to as a Bishop of Auxerre, France.

At some point, following his death, a shrine venerating him was established at Louth. Æthelwold, the Bishop of Winchester from 963 to 984, was actively seeking relics for his newly rebuilt Thorney Abbey in Cambridgeshire and sent his monks to Louth to raid Herefrith's shrine. From an 11th-century account, Æthelwold had:

...heard of the merits of the blessed Herefrid bishop of Lincoln resting in Louth a chief town of the same church. When all those dwelling there had been put to sleep by a cunning ruse, a trusty servant took him out of the ground, wrapped him in fine line cloth, and with all his fellows rejoicing brought him to the monastery of Thorney and re-interred him.

A church dedicated to St. Herefrith, at Louth, appears in accounts from the 13th to 15th centuries, and one of his relics, an ivory comb, is recorded among the possessions of Louth's St. James Church in 1486. Suggestions that the shrine, and later church, of St. Herefrith, were earlier incarnations of St. James has 'no supportive evidence' but St James' is the site of two earlier churches of which little is known. 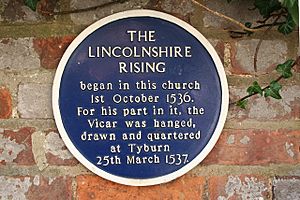 The town was the origin of the Lincolnshire Rising, which started on 1 October 1536 in St James Church. The rising began after Rev. Thomas Kendall, the incumbent, gave an 'emotive sermon', the evening before the King's Commissioners were due to arrive and assess the church's wealth. Some of the townspeople, fearful that the church treasury would be seized by the men of the Crown, demanded the building's keys. The townspeople kept vigil that night, and, the following day, rang the church bells, 'an ancient call to rebellion', to gather a crowd. Having begun marching from Louth, 50,000 supporters converged to camp at Hembleton Hill, the following evening, before they continued to Lincoln to confront the King's Commissioners.

The town's skyline is dominated by St James' Church, Louth, the spire of which is 295 feet (90 m) tall. Though shorter than both Norwich Cathedral 315 feet (96 m), and Salisbury Cathedral 404 feet (123 m), in terms of spire height it is the tallest Anglican parish church in the United Kingdom. The building of the spire commenced in 1501 and was finally completed in 1515.

In 2015 came a remarkable discovery from the adjoining Rectory garden in the form of two pieces of a pre-Conquest standing stone Cross dating to c950. In form the Cross is of the 'ring' or 'wheel head' type, the central design being of Christ crucified. The type is more commonly seen today in Ireland. The Cross and its implications for the archaeology, history and the early church in Louth will be the subject of a major article by Everson and Stocker in the Medieval Archaeology Journal in 2017.

Landmarks and Places of Interest 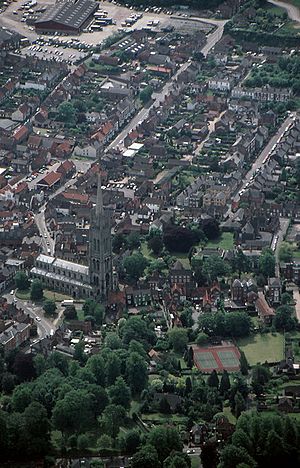 Aerial view of part of Louth

Louth Museum has a Panorama Gallery, which features two back-lit replicas of William Brown's Panorama of Louth viewed from the top of St James' spire in 1844. The two original paintings that together form the panorama hang side-by-side in the Council Chamber of the Town Hall on Little Eastgate. The panorama gives a unique and vivid representation of the streets, businesses, homes and people of the town and the landscape as far as the North Sea to the east and northwards to the Humber estuary and beyond.

Much of the town centre is lined with brick buildings from the 17th and 18th centuries.

ABM Pauls used to have a large maltings which was the first of its kind built in Europe to an American design out of reinforced concrete in 1949. The site had been the location of a maltings since 1870 which was destroyed by German bombs in 1940, and had to be built on the old site to qualify for war compensation. At its height the maltings processed 50,000 tonnes of barley per year, with exports handled through the nearby port of Immingham. The maltings closed in 1998 and the 120 feet (37 m) tall structure was left derelict for many years. The German supermarket chain Aldi was granted permission to build a new store on the site, and it was demolished in 2014/15.

Hubbard's Hills is one of the town's main attractions. It was opened to the public in 1907. The park is dedicated to the memory of Annie Pahud, the central figure of a historic, tragic love affair. The park is situated in a glacial overspill channel that forged the course for a small river, the Lud. It meanders along the deep, flat valley bottom between steep, wooded slopes on either side.

The Belmont television and radio mast, once one of the tallest structures in the European Union (until its height was reduced in 2010), is situated in the nearby village of Donington on Bain, 5 miles (8 km) west of the town.

Louth will be the eventual southern terminus of the Lincolnshire Wolds Railway, based at nearby Ludborough. The town was formerly on the East Lincolnshire Railway from Peterborough to Grimsby, an important north-south route especially for holidaymakers in the summer. It opened in 1848. The line to Mablethorpe started in the town from 1877, closing in 1960. The section to Wainfleet closed in 1961, with the Louth to Grimsby section later continuing for passengers until October 1970, with freight stopping in 1980. The former station is now residential flats; there are other reminders still standing.

Alfred Lord Tennyson was educated at King Edward VI Grammar School. A stone inscription to commemorate this forms part of a wall on Schoolhouse Lane in Louth. 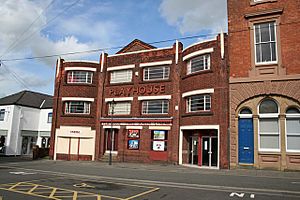 The town's Playhouse Cinema is on Cannon Street, and is home to Louth Film Club, which won the British Federation of Film Societies' Film Society of the Year Award in 2008. Louth Playgoers Society's Riverhead Theatre is on Victoria Road, to the east of the town.

There are several local bands, especially jazz, in and around the town.

Transition Town Louth is a community project, which organizes various events in and around the town aimed at promoting awareness of climate change and unsustainable resources. Part of a large social movement, many Transition Towns are now developing. A sub-group, the Community Food Gardens are encouraging a shift towards sustainable communities. 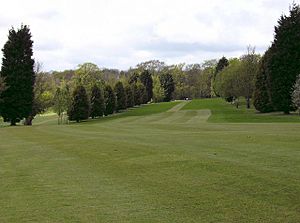 The Centre opened on 6 February 2010, and, by 2013, had received almost one million visits, and was home to over 20 clubs. It cost £12 million and consists of an 8 lane, 25 metre swimming pool and a two level gym with over 80 pieces of equipment, along with a sports hall and other facilities. The Louth Technology Hub, which is using 3D display technology, with a focus on sports groups and clubs, opened on the Centre's upper floor in October 2013.

Louth Tennis Centre is situated on Fairfield Industrial Estate to the north of the town and has indoor and outdoor tennis facilities.

There is a multiuse sports pavilion on London Road, which includes football pitches, a cricket pitch and a multi-use astroturf pitch.

Louth is home to Louth Town Football Club which plays in the Lincolnshire Football League.

In the Wolds to the south-west of the town, around four miles (6 km) away, is Cadwell Park motor racing circuit between the villages of Scamblesby and Tathwell.

Inhabitants of Louth are known as Ludensians, taken from the Latin name of the town (Lude, Luda).

All content from Kiddle encyclopedia articles (including the article images and facts) can be freely used under Attribution-ShareAlike license, unless stated otherwise. Cite this article:
Louth, Lincolnshire Facts for Kids. Kiddle Encyclopedia.