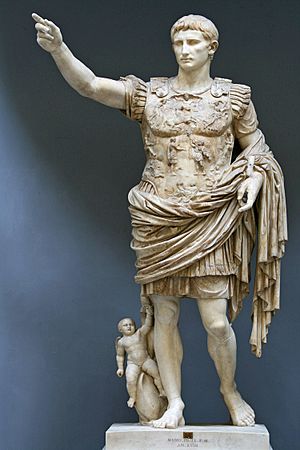 Augustus, the first emperor of the Roman Empire.

The only emperor in the world today is the Emperor of Japan (tennō), but he has very little power. The true leaders of Japan are the Diet and its Prime Minister because the country is a constitutional monarchy.

The English word comes from Latin, the language of the old Roman Empire. At first, an imperator was a powerful general (army leader) but, after Augustus, it was only used by their most powerful rulers. There have been many countries in history whose leaders are called "emperor" in English. The leaders of the Byzantine Empire (basileus, autokrator) in Greece, the Holy Roman Empire (imperator, Kaiser) in Germany, and the Ottoman Empire (sultan, padishah, khagan, kaysar) in Turkey all said they were just new parts of the old Roman Empire.

The leaders of other countries who said they ruled the whole world or called themselves "king of kings" are frequently also called emperors in English. For example, the old rulers of China (huangdi), Russia (tsar), and Ethiopia (negusa negast) are all known as emperors in English. There have also been emperors of France, Germany, and Mexico and the rulers of the United Kingdom called themselves the emperors and empresses of India for a while.

All content from Kiddle encyclopedia articles (including the article images and facts) can be freely used under Attribution-ShareAlike license, unless stated otherwise. Cite this article:
Emperor Facts for Kids. Kiddle Encyclopedia.