James Howard Woods (born April 18, 1947) is an American actor, voice actor, and producer. He is known primarily for playing villainous roles in film. Woods has appeared and voiced in a variety of films and television. 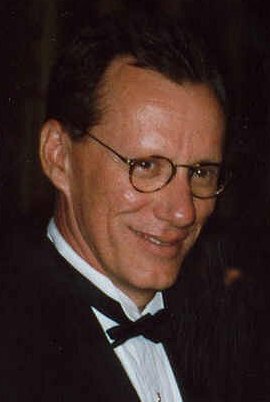 Woods was born in Vernal, Utah, he grew up in Warwick, Rhode Island, where he attended Pilgrim High School, from which he graduated in 1965. He is of part Irish descent and was raised Catholic, briefly serving as an altar boy.

He ultimately chose to pursue his undergraduate studies at Massachusetts Institute of Technology, where he majored in political science, although he originally planned a career as an eye surgeon. He was an active member of the student theatre group "Dramashop" where he both acted in and directed a number of plays. To pursue a career in acting, he left MIT in 1969 before his graduation.

Woods has said that he owes his career as an actor to Tim Affleck (father of actors Ben and Casey Affleck), who was a stage manager at the Theatre Company of Boston while Woods was a student there.

A prominent Hollywood character actor, Woods has appeared in over 130 films and television series, beginning with his first television appearance All the Way Home in 1971 and his film debut The Visitors in 1972. He is known for his dark, intense characters and villains. 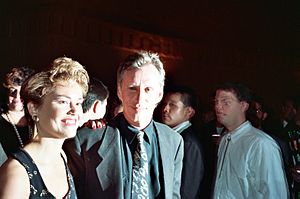 Woods at an AIDS Project Los Angeles benefit in September 1990

Woods has lent his voice talents to many animated television shows and feature films. He received praise for his voice work as Hades in the 1997 Disney film Hercules and he won a Daytime Emmy Award in 2000 for the role in the follow-up television series (for the 1999 season).

He also appeared as a fictional version of himself in the episode of The Simpsons entitled "Homer and Apu". In 2004, Woods voiced Mike Toreno in Grand Theft Auto: San Andreas, followed by Jallak in the 2005 animated film Ark.

All content from Kiddle encyclopedia articles (including the article images and facts) can be freely used under Attribution-ShareAlike license, unless stated otherwise. Cite this article:
James Woods Facts for Kids. Kiddle Encyclopedia.