The Keyser is a nodular limestone overlain by thick- and thin-bedded limestone and laminated limestone at its type locality in Keyser, West Virginia.

The depositional environment of the Keyser is interpreted as shallow marine and tidal flats, occurring in cycles.

In Virginia and West Virginia the Keyser is divided into Upper and Lower Members by the Big Mountain Shale Member. 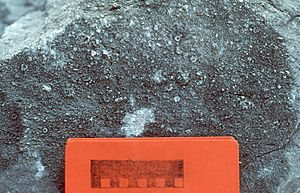 Crinoid fragments at the Old Eldorado Quarry outcrop along I-99, Blair County, PA 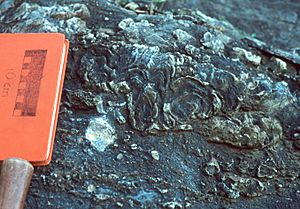 Stromatoporoids at the Old Eldorado Quarry outcrop along I-99, Blair County, PA 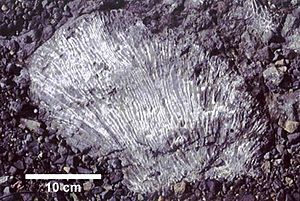 Relative age dating places the Keyser in the late Silurian to early Devonian, with the transition occurring near the top of the formation. Denkler and Harris used conodont biostratigraphy to confirm this.

All content from Kiddle encyclopedia articles (including the article images and facts) can be freely used under Attribution-ShareAlike license, unless stated otherwise. Cite this article:
Keyser Formation Facts for Kids. Kiddle Encyclopedia.