Kyle of Tongue facts for kids

The Kyle of Tongue (Scottish Gaelic: Caol Thunga) is a shallow sea loch in northwest Highland, Scotland, in the western part of Sutherland. Featuring a rocky coastline, its mouth is formed at Tongue Bay. The community of Tongue is situated on the Kyle's eastern shore and the loch is crossed by the Kyle of Tongue Bridge and Causeway.

The sea loch and surrounding countryside is designated as the Kyle of Tongue National Scenic Area, one of the forty such areas in Scotland, which are defined so as to identify areas of exceptional scenery and to ensure its protection from inappropriate development. The designated area covers 24,488 ha in total, of which 21,093 ha is on land, with a further 3396 ha being marine (i.e. below low tide level), and takes in the nearby mountains of Ben Hope and Ben Loyal as well as several small islands and the coastline as far east as Bettyhill. 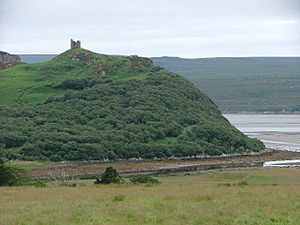 In 1746, a naval engagement occurred at the Kyle involving Bonnie Prince Charlie's Jacobite rebellion. The Jacobite ship Le Prince Charles, commanded by Captain Richard Talbot, was bringing a large amount of French gold to aid the Jacobite cause. It was chased by a British squadron and one of the Royal Navy frigates eventually caught up with it in the Kyle of Tongue, on 25 February 1746. A fierce five-hour battle took place: the Jacobite ship fought bravely, but in the end was defeated. The failure of the gold to reach the Prince's army was one of the main factors which led to the Battle of Culloden.

Kyle of Tongue is situated 8 miles (13 km) east of Loch Eriboll. Its western entrance is between Cnoc Glass and Roan Island; the eastern entrance is between Rosin Island and Neave Island. From Roan Island, the Kyle trends in a south and southwest direction for 7 miles (11 km) to Kinloch. A large portion of it is sandy, with a narrow bar-encumbered channel running through it. The depths range from approximately 18 fathoms west of Roan Island to 5 fathoms in the area 1.5 miles (2.4 km) above where the shallows begin. There is no channel into the Kyle of Tongue along the western shore. Derry (or Loch an Dithreibh) is a lake which empties into the head of the Kyle of Tongue. Strathtongue, an 8-mile (13 km) long stream, runs to the Kyle.

The surrounding hills are characterized by meadows, grasses, and heath. There is moorland between the Kyle and Loch Eriboll. Much of the area is protected as part of the Natura 2000 network, forming part of the Caithness and Sutherland Peatlands, which are protected as both a Special Protection Area and a Special Area of Conservation. Water fauna within the Kyle include salmon and sea trout, whilst whales and otters can be found at the mouth of the loch. Bird species living in the area include barn swallows, black-headed gulls, ravens, redshanks, wood pigeons, herring gulls, collared doves, curlews, oystercatchers, golden plovers, great black-backed gulls, cormorants, grey herons, greylag geese, house martins, house sparrows, meadow pipits, common gulls, red-throated divers, and rock pigeons. Additionally, a number of raptor species can be found, including golden eagles, hen harriers, merlins and short-eared owls.

All content from Kiddle encyclopedia articles (including the article images and facts) can be freely used under Attribution-ShareAlike license, unless stated otherwise. Cite this article:
Kyle of Tongue Facts for Kids. Kiddle Encyclopedia.